A Jewel of a Nut

A Jewel of a Nut

A Jewel of a Nut is the first case in Zootopia: Crime Files. This case involves the theft of the Jeweled acorn, the most valuable acorn in the world.

Clawhauser, happy to see Judy Hopps and Nick Wilde, tells them he has a case for them. A jeweled acorn is here at the Savanna Central Station, that Judy says is the Jeweled acorn, the most valuable oak nut in the world from the Natural History Museum. Merle and Rodney are suspected of stealing the Jeweled acorn. Judy and Nick go to the station and find the acorn covered in saliva. Hurriet the sloth analyzes the acorn in the lab and Clawhauser reveals that the saliva has traces of Sunflower Soda on it. When Judy and Nick deduce that the suspect who stole the missing acorn has cheek pouches and loves Sunflower Soda, they decide to locate and question Rodney, as Nick mentions he saw a "twitchy-looking" squirrel with puffed-out cheeks.

Rodney informs them that he is a tree squirrel, and only ground squirrels have cheek pouches. He goes on to say how his puffed-out cheeks are a result of a visit to the dentist, as too much Sunflower Soda has been rotting his teeth.

They search for more clues at the station and find a trampled newspaper with prints on them. After deducing that the missing acorn was in the cheeks of a soda-loving culprit with tiny feet of 1.25 inch paws, Judy realizes that Merle, a hamster she knows, fits all these criteria. When Merle is arrested, he admits he took the acorn because he thought it would be tasty, only to discover that it was "hard and not tasty".

The Wolf of Paw Street

The Wolf of Paw Street is an updated version of A Jewel of a Nut. Here, the case involves the theft of a statue from the Natural History Museum.

Chief Bogo gives Judy and Nick their first assignment. A statue was stolen from the Natural History Museum and dropped off at Savanna Central Station. Merle and Dribs are suspected of stealing a statue from the Natural History Museum. After finding a piece of fabric that was part of a shirt worn by a small animal, and a threatening note that was deduced to have been in someone's mouth, Judy and Nick arrest Merle for vandalism. Merle says he was just following orders, but refuses to say from who. They knew the statue was too big for Merle to move and to clever for him to write the note. Chief Bogo tells them that Flora & Fauna/Jumbeaux's Café has been vandalized and someone left behind a business card. Judy deduces that the symbol on the card matches the symbol on the note and says that they have a criminal mastermind to catch.

Later on, Judy and Nick check up on Dribs, who asks them to help find some blueprints that he was working on at the train station (he cannot retrieve them himself because the train station is currently a crime scene that he is not allowed to enter). The blueprints are revealed to have been torn up, much to Dribs' dismay.

When Judy and Nick find the missing pieces of the blueprints and return them to Dribs, he thanks them and reveals that the blueprints are for an extra wing on his bomb shelter, as he doesn't believe that the twenty wings he already has are enough. 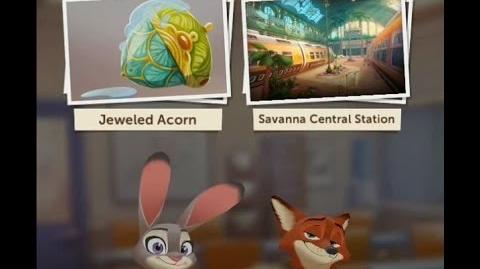 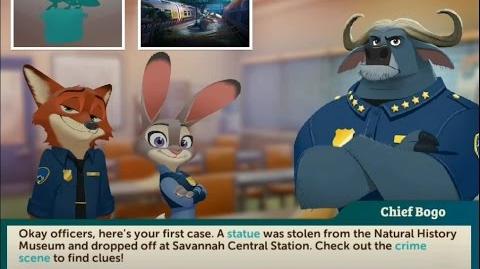