Alan Wray Tudyk (born March 16, 1971) is an American actor and voice actor who is known for his roles as Hoban "Wash" Washburne in the TV series Firefly and the movie Serenity, the Duke of Weselton in Frozen, and Dr. Noah Werner in Suburgatory.

Some of his notable voice roles include voicing various characters in the Ice Age movies, King Candy/Turbo in Wreck-It Ralph, the Duke of Weselton in Frozen, Alistair Krei in Big Hero 6 (and will reprise his role in the TV series), and Superman in Justice League: War. For Zootopia, he provided the voice of Duke Weaselton.

Additionally, he voiced Heihei the rooster in Moana, along with another character, named "Villager #3". He also portrayed K-2SO through voice and motion capture in Rogue One: A Star Wars Story. He returned to lend his voice in Ralph Breaks the Internet as a new character, Knowsmore. He voiced Iago in the new remake of Aladdin. 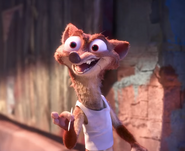