The Art of Zootopia

The Bat eyewitness is a male bat who was cut from Zootopia.

The bat eyewitness has brown fur and orange eyes with black pupils. He has a small wingspan. He wears a blue sleeveless shirt with a bat design on it and olive green shorts.

Not much is known about the bat eyewitness' development other than that he was cut from the film at some point. 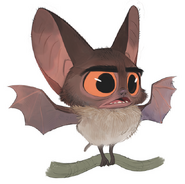 The Art of Zootopia 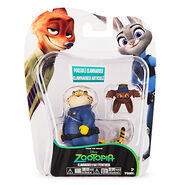