Bonnie Lynne Hunt (born September 22, 1961) is an American actress, director, producer, writer, host, and voice actress, who voices Bonnie Hopps which is the same first name as her first name in Zootopia.

Hunt has performed the voices of Rosie in A Bug's Life, Flint in Monsters, Inc., Sally in the Cars franchise, Dolly in the Toy Story franchise, and Karen Graves in Monsters University.

She starred in films such as Beethoven, Jumanji, Jerry Maguire, and the Cheaper by the Dozen franchise.

Bonnie Hopps
Add a photo to this gallery 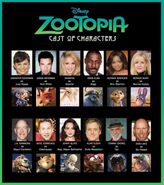 Retrieved from "https://zootopia.fandom.com/wiki/Bonnie_Hunt?oldid=97250"
Community content is available under CC-BY-SA unless otherwise noted.