“Hey! I need to deliver these pizzas!”
―The Cheetah delivery boy to Judy and Nick

The Cheetah delivery boy is a male cheetah in Welcome To Zootopia.

The cheetah delivery boy is first seen near the middle of the comic. When Judy Hopps and Nick Wilde use his motorbike to catch the Squirrel baby, he yells angrily after them, saying that he needs to deliver his pizzas.

Later at the end of the comic, he is seen eating the pizzas he was going to deliver, saying that if he is going to be paying for the pizzas that he couldn't deliver in ten minutes or less, he better enjoy them. 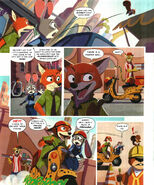