“Caught! My freedom yanked from me like a bad tooth! Still, I regret nothing. Every mammal in Zootopia deserves its own habitat, whether arid, frigid, or tropical. But what of the swampland dwellers? Since no urban planners took them into account, I did it for them. I even altered the scenes at the Natural History Museum to foretell this change. Think of it, hundreds of acres in Zootopia, FLOODED!”
―Chuckles upon being arrested in The Big Catch

Chuckles is a male wolverine in Zootopia: Crime Files. He is a crime boss/criminal mastermind who is suspected of vandalizing the Natural History Museum in Case 6. He is the mastermind behind the frequently mentioned Sequoia Towers project.

Chuckles is a tall, somewhat stocky wolverine with thick, brown fur. He has a dark brown muzzle, black eyebrows, and brown eyes. He wears a pink business shirt under a navy blue suit with a flower pin. His claws are long and black, he carries a cane, and he has a superior expression on his face.

While searching for the suspect who vandalized the Natural History Museum, Judy Hopps and Nick Wilde find a fallen banner and paw prints. The lab analyzed the prints and the banner. Clawhauser says the tracks were made by someone using one paw to carry a walking stick. The banner has prints made of flour and it's covered in perfume, which shows the suspect carries a walking stick, covered in flour, and wears perfume.

Later, Judy and Nick find a Frequent Eater's Club card for Reuben's Bakery in Bellwether's office. They learn from Reuben that a wolverine criminal mastermind named Chuckles bought the card. They approach him and Judy asks why he visits Reuben's bakery that he got a Frequent Eater's Club card. Chuckles says he ordered prodigious amounts of Reuben's cakes to give as gifts to cherished business associates. Nick says he wouldn't have pegged him as being generous with baked goods. Chuckles says they amuse him, and leaves them saying that questioning has him fatigued. Judy sees that he dropped a receipt as he left and Nick comments that his perfume was too much.

Judy suggests they talk to Chuckles about the card in Bellwether's office while Detective Oates thinks it was Dribs. They approach him and Nick asks him about how he set up shop in Bellwether's office. Chuckles compliments Nick on joining the right side of the law. He says he would never conduct his business in so "shabby enclave as City Hall and says they'll need more than a torn card to pin anything on him. Judy declares they will find it. Chuckles calls her adorable and bids them luck.

While searching in Bellwether's office, Judy seems annoyed by Chuckles calling him incredibly infuriating. Then they find wilted flowers, which turn out to be fancy decorative flowers. The lab analyzes them, and they have flour on them. Judy and Nick ask Reuben where he got the flowers and he says they were used for decoration for a lapel.

With enough evidence, Judy and Nick arrest the suspect: Chuckles. Chuckles admits it and says that every mammal in Zootopia has its own habitat, whether arid, frigid, or tropical. He also says that since swampland dwellers didn't have any urban planners to take them into account as well, he did, and altered the scenes at the museum to foretell his plan to flood Zootopia, a project he calls Sequoia Towers. Judy finally understands the whole thing, calling it crazy. Nick points out that wolverines don't even live in swamps and is glad that he didn't go the criminal genius route because he doesn't understand them.

Chief Bogo informs Judy and Nick that Chuckles ransacked the ZPD after his assisted escape from prison. Chuckles is mentioned frequently throughout this case.

While Judy and Nick investigate the vandalization of The Mystic Spring Oasis, they find an oil-soaked note from Chuckles thanking the culprit for their assistance, and says when the Oasis is forced to close, he will swoop in and take over the land.

It is later revealed that the assistance came from someone who claims to love him and would do anything for him.

Additionally, Chuckles' character model appears when Clawhauser does an impression of him, implying that it was a very good impression and he has been practicing. 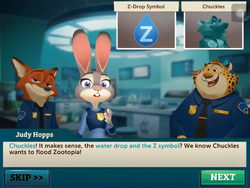 During the case, it is revealed that Chuckles is behind the jamming of the Wi-Fi signals, though exactly why is still unknown. He hired Secretary to do the job.

Later, it is revealed that Chuckles is behind the sabotage of all technology at the Mammal Electronics Show after setting the sprinklers off, though exactly why is still also unknown. He had help from an actress named Justine, who loves him.

After a visit from Dribs, who confessed the plan to flood Zootopia was all his doing, Judy and Nick wonder if he's the criminal mastermind behind everything. Clawhauser alerts them that after putting together surveillance footage of all the crime scenes, he's discovered that Dribs was at every one of them. Judy suggests they catch Dribs. Nick asks if they should still catch Chuckles while he's still a fugitive, to which Judy replies "One crook at a time".

Zootopia Wiki has a collection of images and media related to Chuckles which can be found at
Chuckles/Gallery.