This article is about the figure set. You may be looking for the film characters, Officer Clawhauser and Bat eyewitness.

price varies as per seller (US, Amazon)

The Clawhauser & Bat eyewitness figure set is a set of two rubber figures based on Zootopia.

"Clawhauser is the most warm-hearted police officer at the ZPD, however, he’s a bit of a cheetah when it comes to his diet, and he’s not very fast– donuts are the main suspect. Clawhauser often deals with eyewitnesses, like the Bat eyewitness, who come to the station to report a crime. The poseable 3-inch Clawhauser Figure and 1-inch Bat Eyewitness Figure are in scale with all of the other Zootopia Character Pack Figures. Collect the entire herd of the Zootopia Character Pack Figures and Vehicles so you can recreate the scenes from Zootopia!"[1] 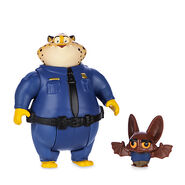 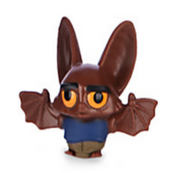