Cory Loftis is a visual development artist at Walt Disney Animation Studios. He worked on several of the main characters and illustrated books from Zootopia.

Loftis is mostly notable for his concept designs for Disney characters. His other movies include Big Hero 6, Wreck-It-Ralph, and Frozen. He has been working for Disney since 2011.

He is most notable for creating concept designs and facial expression sheets for Disney characters. 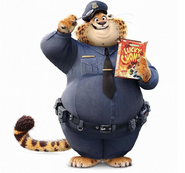