Della Saba is a British actress. She provided the voice of young Judy Hopps in Zootopia.

Della Saba has starred in 2012's The Letter and 2015's Sharkskin. She has also been in two short films, The Last Shift and Rita Mahtoubian is Not a Terrorist. She had a voice role in Shimmer and Shine as the "Genie Jeweler". 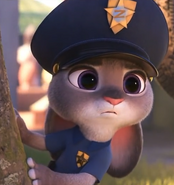