Being kissed, being treated like a toddler when he is not pretending to be one, his pacifier

"You kiss me tomorrow, I'll bite your face off! Ciao."
"She hustled you. [laughs] She hustled you good!"
"You're a cop now, Nick! You're gonna need one of these."
"Have fun working with the fuzz!"

“This adorable fox really did look like an innocent kid with his pacifier, but he turned out to be a crook. Later I realized that he does have a heart - he told me how to find Nick when I needed him.”
―Judy Hopps, The Essential Guide

Finnick is a male fennec fox and a supporting character in Zootopia.

Finnick is a lithe, squat-bodied fennec fox with tan fur. He has a cream-colored face, paw pads and ears, from which sprout feathery, white hairs. His outfit consists of a a black shirt with a vertical red stripe, olive-green shorts, and dark sunglasses.

Finnick sports brown eyes and has an extremely low voice in contrast to his tiny figure.

Finnick is first seen in his elephant costume in Jumbeaux's Café posing as Nick Wilde's son. Nick is trying to buy a Jumbo-pop for Finnick, saying that his "son" loves all things elephant and wants to be one, but the owner Jerry Jumbeaux, Jr., refuses to serve them because they are foxes, which makes Finnick toot his costume's horn in sadness.

Judy Hopps, hearing everything, steps forward and reminds Jerry about the health codes the employees are violating and threatens to shut him down unless he gives them the Jumbo-pop, to which he reluctantly agrees. After thanking Judy, Nick reaches for his wallet, but realizes that he "forgot it" and apologizes to Finnick for "ruining his birthday".

As they leave, Judy, feeling sympathy towards them, pays for the Jumbo-pop herself. Outside, Nick thanks Judy, and she tells Finnick she respects his "dream" of becoming an elephant, giving him a ZPD sticker. As they take their leave, Judy resumes her meter maid duties.

At Sahara Square, she sees Finnick, exiting a van. She excitedly rushes up to him to greet him but stops when she sees him holding a jar with Jumbo-pop juice melted by Nick. When they enter the van, she is shocked to find Finnick driving instead of Nick, the "parent". She suspiciously follows them to Tundratown, where the duo are using the juices to make Pawpsicles to sell to lemmings. Then Finnick collects the discarded sticks and he and Nick sell them as lumber to a mouse construction crew in Little Rodentia.

After their scam, Finnick is paid his share and he exits out of his elephant suit and pacifier. Then he shows his true voice and nature. He says a somewhat violent farewell to Nick, puts on shades and drives off listening to rap music, leaving Nick to an upset Judy.

The next day, Nick and Finnick are prepared to do another "father and son" scam. Finnick is seen in a stroller and Nick pushes the cover down to prevent anyone from hearing his adult-sized snoring. Judy drives up to them and asks Nick about information of the case of Emmitt Otterton. As they banter, Finnick eavesdrops on their conversation. Judy hustles Nick into helping her solve the case with Nick confessing the crime of felony tax evasion. Judy forces him to help her or face five years in prison. After that, Finnick can no longer keep this quiet. He breaks into uproarious laughter at Nick's humiliation praising Judy for her skills. Finnick declares Nick a cop, gives him his police sticker, and leaves laughing.

With no choice, Nick helps Judy, and later they develop a relationship. However, their relationship was on the rocks when the city was gripped in fear. Nick leaves Judy while Judy returns to her home, feeling guilty. Later, after solving a problem, Judy drives up to his van in Sahara Square and knocks on it, hoping to find Nick. Finnick opens the door wielding a baseball bat to attack and yells "Who is it?!" He composes himself when he sees Judy, who begs him to help her find Nick, which he does.

Finnick appears in Burgled Berries, the eighth case of the game. He is interrogated as a suspect of robbing multiple shipments of bogberries.

While searching for clues about the robberies, Judy and Nick find a mud-covered key, a dirty theater program, and a dirty flyer. Detective Oates tells them that the owner of the stand reported that a suspicious character was seen lurking around. The suspect is short, hairy, has big ears and wears an elephant costume. Nick recognizes him as Finnick, although he's sure he's not involved in the robberies.

Judy and Nick visit Finnick and Nick greets him. Finnick tells him about not talking to the fuzz. Nick calms him down and asks him about the robberies of shipments of bogberries. Finnick says he knows nothing about bogberries and that he was seeing a lady friend near the stand, which was the reason he's here. Nick praises him and claims him innocent, but Judy reminds him that just because he's a friend doesn't rule him out as a suspect.

The lab cleans the key off and Judy and Nick learn from Clawhauser that the key is used for a van. They know that Finnick drives a van. They return to the fruit stand and find a hairy comb. After cleaning it off, they see that it's an eyebrow comb. After the lab analyzes it, Clawhauser tells them that the suspect takes good care of their eyebrows. Nick points out that Finnick's eyebrows are always perfectly manicured, but says he would never tell Finnick so. Judy is sure that Finnick would be happy that he noticed.

They go to Finnick and Nick asks if the eyebrow comb is his. Finnick says that these are for bushy eyebrows and he uses a set of tweezers. Finnick tells them that his lady friend likes The Green Horn and they're in the same juicing business as Cleo and that they use the same fruit stand. He suggests they check it out. Judy knows there's dirty dealings in the competitive juicing industry and thanks him. Finnick gives them a Green Horn flyer which is torn, but is later fixed. Finnick leaves them to pick up his lady friend in his van.

Later, after the case is solved, Finnick tells Judy and Nick he misplaced a gift for his lady friend at the fruit stand. Finnick asks them to find it for him, proving to be Zootopia's finest. Nick asks if he's enjoying it and Finnick laughs, saying he is and tells them to find it. At the fruit stand, they find a broken rusty necklace. They fixed it, and Judy says that Finnick has good taste. Nick says Finnick has good taste in friends. They return the necklace to Finnick and he thanks them, saying that his lady friend will be thrilled, especially it was first broken and now it is fixed. Nick says to not mention it and never bring it up again.

Finnick worked with Nick Wilde, helping him get the Jumbo-pop, then melting it and selling the melted molds of pawpsicles to lemmings. However, after they finish their scam, Finnick says a violent and unfriendly farewell to Nick. Later in the movie, he praises Judy after she is arguing with Nick and is seemingly winning. He is very quick to switch to the winning side.

When Judy meets Finnick, she falls for his and Nick Wilde's father-and-son act, believing him to be a toddler. She buys the Jumbo-pop for both Nick and Finnick and voices her encouragement for his "dream" of being an elephant before giving him a police sticker. When Judy spots Finnick again, she sees him and Nick making their pawpsicles and discovers that he is not actually a child. When Judy meets Nick again and blackmails him into helping her solve a case with felony tax evasion, Finnick laughs at Nick, praising Judy for hustling him. Finnick slaps his police sticker on Nick's shirt and leaves him with Judy, while Judy watches him go, smiling. Near the climax of the film, Judy visits Nick's van. Finnick opens the door, preparing to attack until he sees Judy. Judy pleads Finnick in compassion to help her find Nick, which he does. Overall, Finnick seems to like Judy's personality and quick-thinking.

Finnick's relationship with his girlfriend is unexplored, but he appears to be very affectionate toward her.

Zootopia Wiki has a collection of images and media related to Finnick which can be found at
Finnick/Gallery. 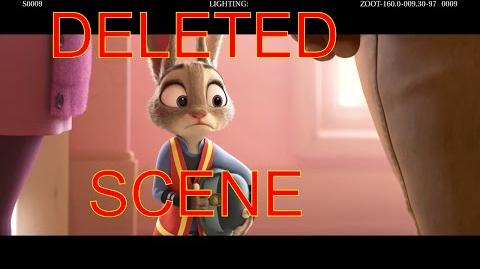