Bringing Out the Dead
Feast
Zootopia

Fuschia J. Walker, known to the public as Fuschia!, is an American actress. She voices Major Friedkin in Zootopia.

She debuted in the acting community in 1999 in the film Bringing Out the Dead. She then went on to star in the 2014 Disney short film Feast, and most recently, Zootopia.

The character she portrayed, the ZPD's Drill Instructor Major Friedkin, pushed protagonist Judy Hopps to her limits in order to prove that she could be a real cop. 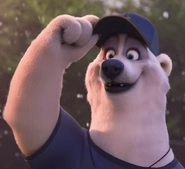