The Art of Zootopia
The Official Zootopia Handbook
The Big Case

“Zootopia is a unique place. It's a crazy, beautiful city where we celebrate our differences. This is not the Zootopia I know. The Zootopia I know is better than this. We don't just blindly assume blame. We don't know why these attacks keep happening, but it is irresponsible to label all predators as savages. We cannot let fear divide us. Please, give me back the Zootopia I love.”
―Gazelle's peace speech

Gazelle is a female gazelle and a famous Zootopian pop star, as well as a predator rights activist. Her single, "Try Everything", is the main soundtrack of the film.

“Are you familiar with Gazelle? Greatest singer of our lifetime? Angel with horns?”
―Officer Clawhauser

Gazelle is one of the most popular celebrities in Zootopia, having many fans, which include Judy Hopps, Clawhauser, and even Chief Bogo. Her importance and popularity stems from the fact that she is very socially-minded and believes in acceptance and equality for all.

She is a model for Preyda, and appears on the covers of magazines such as Vanity Fur.

This is evidenced by the titles of her music; Judy listens to "Try Everything" while on the train to Zootopia, and the titles of multiple other pieces by Gazelle are shown. These were never played or mentioned otherwise during the film. She is also the model for the Zootopia welcome screen in Savanna Central, and has an app to "paste your face on one of the background dancers, and Gazelle compliments your "dancing".

Gazelle is tall and slim, with a thin waist and large hips. She has golden brown fur, tall, spiraling horns and a lock of golden hair hanging over her brown eyes. Gazelle is quite fashionable; her usual outfit consists of a sparkly, red top and matching skirt and high-heeled shoes. She wears a gold bangle on each delicate wrist.

Despite being a pop idol, she is very humble and kind and loves singing. She cares for equality and loves Zootopia because she believes it is a place where people are equals regardless of whether they are predator or prey.

She even held a peace rally when the conflicts between predator and prey arose. All of her dancers are also shown to be predators, namely tigers, holding true to her values.

Gazelle appears several times during the film, starting with an appearance on a building-sized screen welcoming animals in which she says, "I'm Gazelle. Welcome to Zootopia." She also appears on a popular app in which you can paste your face on one of her background dancers, and she will praise your dancing.

Later on in the film, after the press conference that causes conflict between prey and predators, she organizes a peace rally. She says, "Give me back the Zootopia I love" at the end of her monologue.

After prey and predators are reunited by Bellwether's recorded confession to the ZPD, Gazelle wraps the movie up with a concert for the |citizens of Zootopia.

Gazelle is featured briefly on a page of the Handbook. She states that if she's in Sahara Square, she's at the Palm Hotel.

Gazelle is seen dancing onstage with her tiger dancers, singing a song in honor of Zoo Year's Eve amid an applauding crowd.

After the launch of the first annual Skunk Appreciation Parade, Gazelle is seen singing on a parade float, cruising through Sahara Square. But meanwhile, an angered porcupine throws one of her quills into a skunk-shaped parade balloon. The balloon begins to deflate and zooms away, pulling Gazelle and her float along with it. Judy Hopps and Nick Wilde catch up to and board the float, and Nick cuts one of the ribbons on the float and ties a pair of scissors to the ribbon. Gazelle grabs the ribbon and Judy instructs her to pull. Gazelle uses the scissors to cut the rope that attaches the float to the deflating balloon, and the inflatable skunk floats harmlessly away. But the float, still moving, crashes right into a fountain.

At the end of the comic, Gazelle is singing in the parade again, surrounded by her tiger dancers, with the skunks and the porcupines.

Gazelle is the face of many popular brands and has evidently had a number of appearances in Zootopian media.

Gazelle is the face of Preyda, the popular clothing, and fashion accessory brand, and appears on a number of posters and advertisements around Zootopia. She also appears on the only front cover of Vanity Fur which has been released.

Thanks to her status as a major celebrity in Zootopia, she also appears on a major billboard with audio, saying, "I'm Gazelle. Welcome to Zootopia." It is one of the first things outside of the main Savanna Central train station.

In the only major concert we see, she attracts a very large numbers of fans and supporters.

Gazelle is the focus of an app for smartphones where one can copy and paste their face over one of Gazelle's dancing partners, with Gazelle complimenting their dancing. Known users of this app are Benjamin Clawhauser and Chief Bogo.

Zootopia Wiki has a collection of images and media related to Gazelle which can be found at
Gazelle/Gallery. 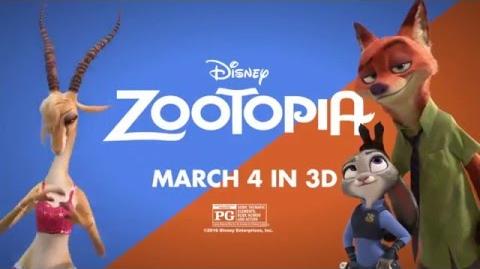