The Stinky Cheese Caper and Other Cases from the ZPD Files

The Jaguar warden is a male jaguar in The Stinky Cheese Caper and Other Cases from the ZPD Files.

Role in the Book

Judy Hopps and Nick Wilde meet up with the Jaguar warden to discuss a prison evacuation. He explains they had to evacuate the solitary cell block and move it's only prisoner, a platypus he often mistakes for a beaver. Judy tries to tell him the differences between beavers and platypi, but the warden just says "Close enough".

He goes on to say how he was working late in the prison tower when he witnessed a sports car drive up to the prison wall and throw some foul-smelling cheese over it. When Nick asks if he knows what species the driver was, the warden says that it was either a wolf, coyote, or fox.

Judy and Nick visit the Jaguar warden again to investigate a prison break. He strings police tape around a hole in the floor as he says they are trying to keep the prison break a secret from the other prisoners so that they won't know escape is possible.

He explains that the escapee is Singcor Swim, the criminal platypus mentioned earlier, and that the side of the prison he was moved to did not have reinforced cement to prevent escape. 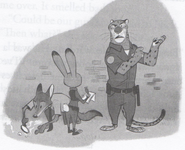