Jared Bush is the co-director and one of the writers for Zootopia. He voices Pronk Oryx-Antlerson.

Jared wrote for the CBS sitcom Baby Bob, and comedy television series Totally Outrageous Behavior as well as Dumb and Dumber and NBC-produced reality show Who Wants to Marry My Dad?.

Bush is best known for co-creating the Disney XD animated series Penn Zero: Part-Time Hero. He was the co-producer, a writer, and story editor for the UPN network comedy television series All of Us. 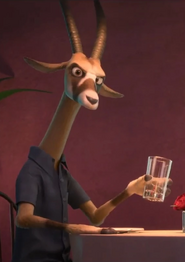 Pronk Oryx-Antlerson
Add a photo to this gallery

Retrieved from "https://zootopia.fandom.com/wiki/Jared_Bush?oldid=100439"
Community content is available under CC-BY-SA unless otherwise noted.