Slate wrote the script for a reboot of the Looney Tunes franchise for Warner Bros. She co-created and voiced Marcel, a talking shell with an Oobi eye and a pair of doll shoes, in Marcel the Shell with Shoes On.

Slate's first major role in a film was as Zoe, an antagonist, from Alvin and the Chipmunks: Chipwrecked. She starred in Obvious Child, which won her the Critics' Choice Movie Award for Best Actress in a Comedy. 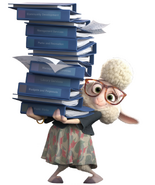