Judy's Journey: As Told By Emoji is a short animated film, based on Zootopia. It tells the story of Judy Hopps' childhood in achieving her dreams of becoming a police officer in a short version within the confines of a mobile phone.

The film begins with a phone on a haystack showing two speech bubbles of a haystack and a pitchfork and a carrot. We see young Judy Hopps appear from a speech bubble. She puts on a police officer hat, cheerfully hops around, and does a little flip, hoping to become the first bunny cop. Then, young Gideon Grey appears from a speech bubble and displays a police officer hat emoji. He hops on it and holds on it. He hops on the "Ha-ha" signal and laughs. Judy talks in a speech bubble with 1st bunny officer emoji. Gideon pushes Judy and replaces the emojis with No emojis. Judy, still cheerful, knocks off the no emojis. Enraged, Gideon slashes Judy on the cheek and displays a speech bubble of a bunny, a carrot, and a haystack and pitchfork emoji.

Judy talks through a speech bubble that herself equals "1st bunny officer". She hops across the phone where she grows up and enters the Zootopia Police Academy. Major Friedkin starts the training. The trainees start to climb up the frigid ice wall. Judy tries to climb up, but she slips. Major Friedkin is disappointed. Judy slumps. Major Friedkin starts the training again. After the first trainee climbs over the wall, Judy gets an idea (light bulb emoji). As the wolf trainee climbs up the wall, Judy hops on his head, and manages to get over the wall, much to everyone's satisfaction.

Judy hops down to a graduation ceremony where Mayor Lionheart announces in a speech bubble with the emojis of 1st, bunny, and officer. Lionheart presents Judy her badge and a profession update alert appears saying "Police officer job is now available to you." Judy puts on her officer hat, hops around with happiness, and shines her badge, ending the film.

After the film, a card with Judy appears with one of her quotes, "Anyone can be anything.", followed by the "Be Inspired Disney Citizenship" logo, tips of things to do if being bullied, and ending with the logo of "Pacer's National Bullying Prevention Center". 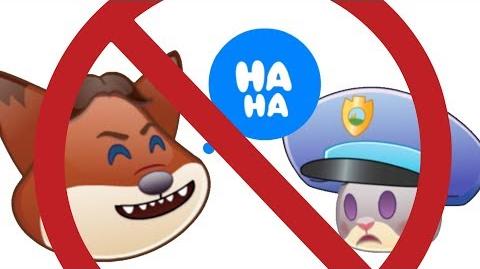