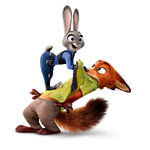 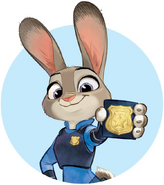 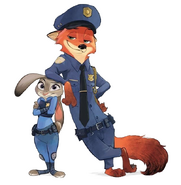 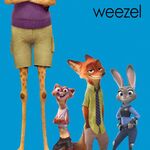 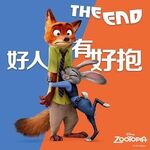 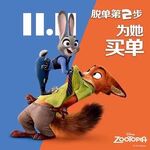 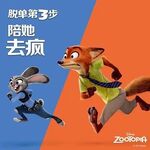 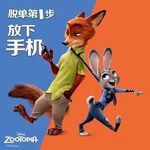 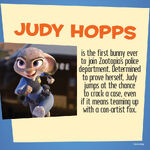 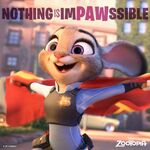 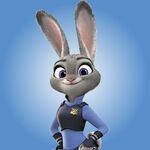 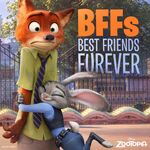 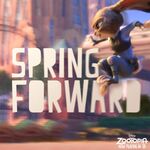 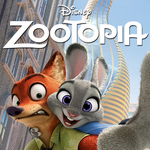 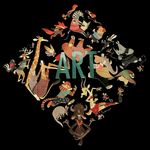 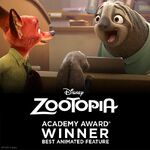 Judy and Nick make a cameo appearance in an image from Wired (Hint: look at the shadows to the far right of the image) 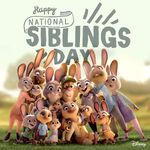 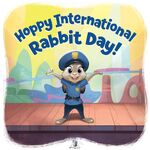 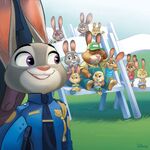 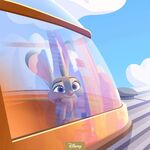 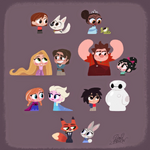 Jaguar "pounces" on Judy during the play.

"Back then, the world was divided in two."

"But over time, we evolved and moved beyond our primitive, savage ways. Now, predator and prey live in harmony."

"And I can make the world a better place."

"It may seem impossible to small minds - I'm lookin' at you, Gideon Grey..."

"...where our ancestors first joined together in peace and declared that anyone can be anything!"

Judy seeing Gideon Grey up to no good.

"Look at her nose twitch! She is scared!" - Travis

Judy kicks Gideon in the face.

Judy gets her cheek slashed.

Judy being bullied by Gideon.

Judy got the tickets back.

"Well, he was right about one thing:"

"You're going to have to master all of them before you hit the streets or guess what?" -Major Friedkin

Judy in training at the Zootopia Police Academy.

Judy on the monkey bars.

...but falls into the frigid water below it.

"You're dead!" -Major Friedkin, after Judy gets beaten up by the “criminal”

Judy gets her ear stuck in a car door.

Judy manages to make it over the frigid ice wall.

Judy beating the "criminal" while in training.

Bellwether pinning Judy's badge on her.

Judy, excited that Mayor Lionheart has assigned her to the heart of Zootopia Precient one city center.

"I won't let you down. This has been my dream since I was a kid."

Judy posing for the cameras.

"Guys, I've been working for this my whole life."

"The only thing we have to fear is fear itself."

"She has no need for a fox taser, Stu!" -Bonnie

"Okay, look, I will take this. To make you stop talking."

Judy listening to 'Try Everything'.

Judy marveled at the rain in the Rainforest District

Judy on her way to Zootopia.

"And welcome to the Grand Pangolin Arms." -Dharma Armadillo

Judy ready to start the day

Judy looking at the fox repellent

"Ooh, uh, you probably didn't know, but, a bunny can call another bunny cute, but when other animals do it, it's a little..."

Judy struggling to get on the chair...

"Officer Hopps. You ready to make the world a better place?"

Judy clapping for Francince on her birthday.

"Sir, you said there were 14 missing mammal cases."

"You probably forgot, but I was top of my class at the Academy."

Judy on the lookout for overdue parking meters.

Judy preparing to use her fox repellent on Nick

"Keep the change." -Judy buying the Jumbo-pop for Nick and Finnick

"I just wanna say that you're a great dad and just a... a real articulate fella!"

"Because this is Zootopia. Anyone can be anything."

"Look at that smile. That's a happy birthday smile!"

Judy sees Finnick through a windshield

"You told that mouse the pawpsicle sticks were redwood!"

"That's right. Red wood. With a space in the middle. Wood that is red." -Nick

"You're gonna wanna refrain from calling me 'Carrots'."

Judy is almost stepped on by a rhino.

"Everyone comes to Zootopia thinking they can be anything they want. Well, you can't." -Nick Wilde

"You can only be what you are." -Nick

Judy is depressed after a long day

"I was thirty seconds over!!" -Moose

"Stop! Stop in the name of the law!" -Judy chasing after Duke Weaselton

Judy stopping buildings in Little Rodentia from tipping over

Judy looking around for Duke Weaselton.

Judy saves Fru Fru from being crushed by a giant donut.

Judy holding the donut sign in front of Duke

"I popped the weasel!"

Judy being lectured by Chief Bogo

Judy feeling sorry for Mrs. Otterton when her husband, Emmitt Otterton is missing

"Us little guys need to stick together right?" -Bellwether

"Just call if you need any help. You always got a friend at City Hall, Judy." -Bellwether

"Actually, it's Officer Hopps and I'm here to ask you some questions about a case!"

"You sold Mr. Otterton that pawpsicle, right? Do you know him?"

"Did you just boot my stroller?" -Nick

"Nicholas Wilde, you are under arrest."

"For what? Hurting your feewings?" -Nick

"Well, it's my word against yours." -Nick

"Two hundred bucks a day, Fluff! 365 days a year since I was twelve!" -Nick's recording

"Actually it's your word against yours."

"It's called a hustle, sweetheart."

"She hustled you good!" -Finnick

"Have fun working with the fuzz!" -Finnick

Judy and Nick walking up to Yax

"Yeah, in Zootopia, anyone can be anything. And these guys? They be naked." -Nick

"Rabbit, I did what you asked! You can't keep me on the hook forever." -Nick

"Not forever. Well, I only have 36 hours left to solve this case."

"So can you run the plate or not?"

"Flash is the fastest guy in there. You need something done, he's on it." -Nick

"What, are you saying that because he's a sloth he can't be fast? I thought in Zootopia anyone could be anything." - Nick

"Officer Judy Hopps, ZPD. How are ya?"

"What do you call a three-humped camel?" - Nick

"Madam, I have a fake badge. I would never impede your pretend investigation." -Nick

"Well, then they should've gotten a real cop to find him." -Nick

"...you don't need a warrant if you have probable cause and I'm pretty sure I saw a shifty lowlife climbing the fence."

"So you're helping plenty! Come on!"

"The most feared crime boss in Tundratown. They call him Mr. Big. And he does not like me! So, we gotta go!" - Nick

"I, um, may have sold him a VERY expensive wool rug that was made from the fur of a skunk...'s butt." -Nick

"What about him? Is that him?"

"So intimidate me all you want. I'm gonna find out what you did to that otter if it's the last thing I do."

"What did we say? No icing anyone at my wedding!" -Fru Fru

Fru Fru recognizes Judy as the one who saved her life.

Judy and Nick with Mr. Big at Fru Fru's wedding.

"So you just open the door and tell us what you know, and we will tell you what we know. Okay?" -Judy trying to reason with Manchas.

Judy and Nick being chased by savage Renato Manchas.

"There! Head to the sky-trams!"

Judy hanging onto the edge

Judy and Nick trapped in vines

Judy and Nick fall through the Rainforest District

Judy and Nick are approached by the Police

Judy and Nick are suspended by vines

Judy preparing to show Manchas to the police.

"I was... small and emotionally unbalanced like you, once." -Nick

"Nick, you are so much more than that."

"No. But I have a friend at City Hall who might."

"We need your help."

"We just need to get into the traffic cam database."

"I called him Lionfart once, he did not care for that, let me tell you, it was NOT a good day for me." -Bellwether

Nick sneaking past one of the guards.

Judy trying to talk to a savage Emmitt Otterton.

"Or not! Guess he's in no rush to get home to the missus." -Nick

Judy and Nick struggling to get out of a locked cell.

"You were just trying to protect your job!"

"Here, in case you need something to write with."

"...it may have something to do with biology."

"Was I okay?" -Judy after her interview.

"The kind that makes you think you need to carry around fox repellent?" -Nick

Judy reaches for her fox repellent when Nick startles her...

...which makes the two realize how biased she is against foxes.

"Probably best if you don't have a predator as a partner." -Nick

Judy realizes that her partner is leaving her.

Judy trying to break up a fight at the Gazelle's peace rally.

"Clawhauser? What are you doing?"

Judy's image on an advertisement for the ZPD.

"A good cop is supposed to serve and protect. Help the city. Not tear it apart."

"I don't deserve to wear this badge." -Judy resigning from the ZPD.

"Thank you for the opportunity."

"A dozen carrots. Have a nice day."

"Well, I know a thing or two about being a jerk."

"Bye!" -Judy heading back to Zootopia.

Judy knocking on Finnick's van, hoping to get his help.

"I need to find Nick. Please."

Judy is forgiven by Nick

"There we go, deep breaths." -Nick

"Are you just trying to get the pen? Is that what this is?" -Nick

"You know this guy?"

Judy and Nick are not impressed with Duke's taunting.

Judy finding out that the predators are going savage, because Doug has been darting them with Night howler pellets.

Judy realizing she can use Doug's lab as evidence of him turning predators savage.

"We need to get this evidence to the ZPD!"

"Great, you're a conductor now? It would take a miracle to get this rust-bucket going." -Nick

"All right. One toot-toot."

"Well, I can cross that off the bucket list." -Nick

"Hey! Need some help?" -Judy about to kick Woolter off the train.

"Okay, yeah, Maybe some of the evidence survived."

Judy and Nick behind Doug's lab as it explodes.

"Everything is gone. We've lost it all."

"We found out what's happening!"

Judy hesitates to give the case to Bellwether.

Judy urges Nick to leave her and take their evidence to Chief Bogo.
<a class="image lightbox" href="/wiki/File:I%27m_not_leaving_you.jpg" title="I'm not leaving you.