This article is about the figure set. You may be looking for the film characters, Judy Hopps and Assistant Mayor Bellwether, or the relationship between them.

The Judy Hopps & Assistant Mayor Dawn Bellwether figure set is a set of two rubber figurines based on characters from Zootopia.

"Officer Judy Hopps and Assistant Mayor Bellwether have one thing in common (besides their cottontails): they both believe that in Zootopia anyone can be anything, so don’t count the little mammal out. The 3-inch Judy Figure and 2.5-inch Bellwether Figure are poseable and are in scale with all of the other Zootopia Character Pack Figures. Collect the entire herd of the Zootopia Character Pack Figures and Vehicles so you can recreate the scenes from Zootopia!"[1] 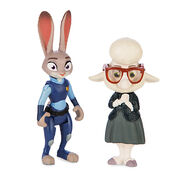