This article is about the mascot seen at Disney Parks. You may be looking for the character in the film.

In Disney parks, Judy Hopps is portrayed by a costumed actor who can interact with guests.

At Shanghai Disneyland, Judy does meet-and-greets at Happy Circle.

Move it! Shake it! Dance & Play it! Street Party

At Walt Disney World, Judy and Nick can be seen in the Move it! Shake it! Dance & Play it! Street Party parade at the Magic Kingdom. Meet-and-greets at Walt Disney World parks arrived in 2017, along with Nick Wilde.

Judy and Nick are participants in the annual Usatama on the Run! Easter parade in Tokyo Disneyland. 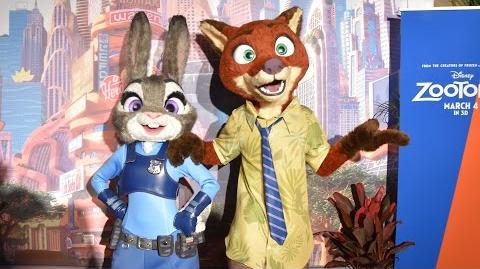 Judy Hopps and Nick Wilde Meet & Greet
Add a photo to this gallery
Retrieved from "https://zootopia.fandom.com/wiki/Judy_Hopps_(park_character)?oldid=99224"
Community content is available under CC-BY-SA unless otherwise noted.