Owner of the Green Horn

“Well, sure I drive a van! How else am I going to transport the BEST all-natural, organic grass juice in all of Zootopia?”
―Katee, Burgled Berries

Katee is a female koala in Zootopia: Crime Files. She is the owner of the Green Horn who is suspected of robbing shipments of bogberries. She appears in Case 8.

Katee has gray fur with a cream-colored muzzle and cream-colored circles around her brown eyes, which are framed by dark eyelashes. She has large, hairy ears, each about the size of her head, and a big black nose. Her outfit consists of a green collared shirt and small black horn-rimmed glasses. 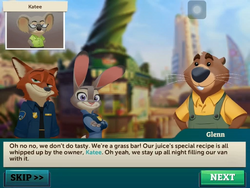 At the fruit stand, Judy and Nick find a hairy comb and a receipt. The comb is revealed to be an eyebrow comb and Finnick tells them that the comb is for big bushy eyebrows. The receipt is analyzed at the lab and Clawhauser tells them that the receipt was for fast food purchased at 4 am. Judy deduces that the culprit works late. After looking at a torn flyer for the Green Horn from Finnick, they know that the Green Horn is competing with the Juice Bar. They talk to the manager of the Green Horn, Glenn, and ask him about the robberies. Glenn says they're a grass bar and that they don't do fruits, especially bogberries. He says that the juice's special recipe is whipped up by the Green Horn's owner, Katee, and they stayed up all night filling their van with it. 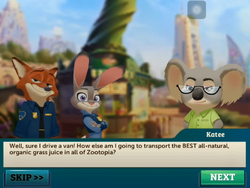 They go to Katee, and Judy asks her if she drives a van. She says it's true, otherwise she'll never transport the "best all-natural organic grass juice in all of Zootopia". She says that the grass juice is "amazing and yummy yummy yummy." Nick suggests that they search the Green Horn. They find a bottle of pills at the Green Horn. The pills are Eucalyptus caffeine pills, designed to keep mammals awake. The lab analyzes it and Clawhauser tells them that the bottle has Katee's prints all over it. They go to Katee and ask her about the pills at the Green Horn, but she's asleep. Judy wakes her up. Katee says she sometimes stays up late working on her delicious secret recipes so she took a Eucalyptus caffeine pill. Nick asks her why her all-natural organic products aren't enough of an energy boost, but Katee is asleep again. 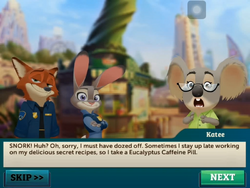 Later, Judy and Nick search the Green Horn again and find golden tickets. They learn that the golden tickets are Midnight Theater Subscriber Tickets, available only to subscribers who go to the theater at midnight. They know that these belong to the culprit who must stay up late. The lab analyzes them and Clawhauser tells them that Katee's name is on the back of the tickets. They talk to Katee again and ask if these tickets belong to her. Katee says yes, saying she's up late working on her "delicious secret grass juice recipes, the best grass juice Zootopia has to offer", so sometimes she takes in a show. Nick says that a theater fan working late is downright incriminating. Judy agrees and thinks they know well enough to make an arrest. 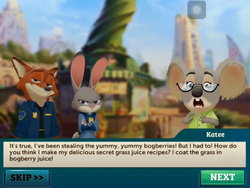 Shortly, Judy and Nick arrest Katee for the robberies. Katee confesses of stealing the bogberries. She said to make her delicious secret grass juice recipes, she coated the grass in bogberry juice. Nick, wondering how she made grass taste good, asks why did she steal them instead of buying them. Katee says if she bought them, people would know and her secret would be out and she would be ruined. Judy agrees that didn't happen and sends her to jail, where at least Katee says she'll enjoy prison food and not grass, which Nick sees as an upside.

Zootopia Wiki has a collection of images and media related to Katee which can be found at
Katee/Gallery.

Retrieved from "https://zootopia.fandom.com/wiki/Katee?oldid=97161"
Community content is available under CC-BY-SA unless otherwise noted.