Kristen Bell (born July 18, 1980) is an American actress and singer. She provides the voice for Priscilla Tripletoe.

Her perhaps most well known Disney role was Anna from Frozen and its short, special, its sequel, and Ralph Breaks the Internet. She also portrayed the title character of Veronica Mars; which was also her first major role as a voice actor. Bell began her career by starring in stage productions. 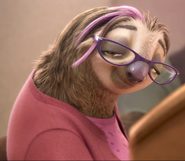