Welcome to Zootopia
The Big Day in Little Rodentia

“Nestled in downtown Zootopia, this neat and tidy gated community is home to Zootopia's smallest residents - mice, gerbils, rats and other small rodents. There is a height requirement to enter so residents remain safe from potential stomping incidents. Those who are too tall to enter can still enjoy a glimpse of this quaint community from outside its gates.”
―The Official Zootopia Handbook

Little Rodentia is a town for small mammals, mainly rodents, in the city of Zootopia. It contains numerous buildings which, to the larger residents of Zootopia, appear very small, which contributes to the name Little Rodentia.

Holey aesthetics of Swiss cheese can be seen extensively throughout Little Rodentia, including numerous taller buildings resembling skyscrapers. These buildings resemble a model town or miniature-scale model of a city to larger residents of Zootopia.

Some buildings in Little Rodentia have colored pipe bridges that connect them to other buildings.

Officially, the entire town is only 21 inches tall. There is a tourist bus that goes through Little Rodentia and begins at The Big Donut, a shop which has a large donut model atop its roof which is nearly destroyed during the chase between Judy Hopps and Duke Weaselton.[2]

The town contains at least one Targoat and Mousy's, Zootopia analogues for real-world department stores Target and Macy's respectively.

The district is first seen briefly near the middle of the film during Nick Wilde's and Finnick's pawpsicle scam. Nick and Finnick deliver their pawpsicle sticks to a mouse foreman at a construction site, who questions their red color.

Nick replies that the sticks are "red wood" and the mouse foreman takes his word for it, accepting the delivery.

Judy Hopps and Duke Weaselton become engaged in a chase through the small town after Weaselton robs the Frantic pig's flower shop. Before capturing him, Judy manages to save Fru Fru from being crushed by a "giant" donut that Weaselton had kicked off of the donut shop. She then uses the donut to trap Weaselton so that she can bring him to the ZPD.

In a deleted scene, from an early concept of the film, Judy chases Nick through the town. Nick, trying to escape the cop, balances on a mouse-sized car, jumps over The Big Donut, and slides face first down the street, knocking down various things in the process. Judy fires a tranquilizer dart, but misses, and Nick escapes over the fence. 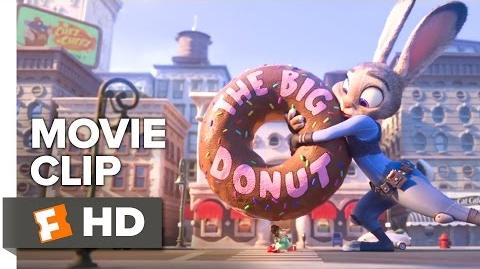 Retrieved from "https://zootopia.fandom.com/wiki/Little_Rodentia?oldid=96267"
Community content is available under CC-BY-SA unless otherwise noted.