“I've raked in thousands in insurance fraud from this guy who can't seem to stay dead!”
―Louise, Missing Opossum Report

Louise is a female lemming insurance agent in the game Zootopia: Crime Files. She is a suspect in a case involving a missing body. She appears in Case 4, Missing Opossum Report.

Louise is a short, squat lemming with dark brown fur and a golden muzzle, face, ears and paws. She has brown eyes framed by eyelashes, a pair of buckteeth, and a tuft of swept-back fur on the top of her head. Her outfit consists of a rose-patterned, powder blue shirt, a navy blue jacket, a gold watch, and a set of pearl earrings with a matching pearl necklace.

While Judy Hopps and Nick Wilde search for the missing body of a dead opossum named Victor, they learn that Victor's life insurance policy was signed by Lance the bank teller who delivered them to his boss, Louise. They question Louise about the insurance papers and Louise says she is Victor's insurance agent and is in charge of Victor's finances. She declares that the information Judy and Nick are looking for is "strictly confidential".

Judy and Nick search Lemming Brothers Bank and find more documents which are signed by both Victor and Louise. They question Louise again about the documents, and Louise says she is the insurance agent and any important documents would, of course, be signed by her. When asked what's in the documents, she explains that the contents of the documents are "a comprehensive rundown of the various appendices relevant to a legal document of this nature".

Judy and Nick go to Savanna Central Station and find a bank ID and its ID number. They later return to the bank and find a piece of paper with the password "P4W5". After researching the bank ID and password in the lab, they learn that the ID number belongs to Louise. They talk to Louise again and question why her bank ID was at the train station. Louise answers that she was catching a train. 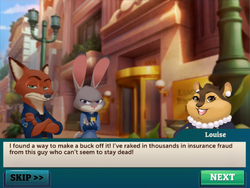 At Savanna Central Station, Judy and Nick discover a deposit slip for a life insurance payout cashing in on Victor's "death". The lab analyzes the slip and discovers that the ATM used to gain the deposit slip was a rodent ATM that could only be used by tiny mammals. With this evidence, Judy and Nick arrest Louise for taking out life insurance policies on Victor, faking his death, and collecting the money, which Nick says is the "oldest trick in the book".

Louise admits she has been raking in thousands of dollars insurance fraud from Victor, who kept "dropping dead" and never remembered it. Nick comments that this has been the strangest case of "playing possum" he has ever seen.

Zootopia Wiki has a collection of images and media related to Louise which can be found at
Louise/Gallery.