Judy Hopps and Nick Wilde are informed of an opossum named Victor has recently passed away. Chief Bogo assigns them to solve the case of the disappearance of his body at the hospital and question a porcupine orderly named Kevin, who was the last known mammal to talk to Victor.

Kevin tells Judy and Nick that nobody came into Victor's room except police officers and himself after Victor's death. Nick says that this makes Kevin a suspect. This causes Kevin to freak out, saying this will not make his mother happy.

While searching the hospital room, Judy and Nick find three clues; a dirty crumpled document, a paw print, and pieces of broken link of gold. They discover that the crumpled document is a life insurance policy, meaning that someone has something to gain from Victor's disappearance. Judy points out that the document was signed by a bank teller named Lance from Lemming Brothers Bank and suggests tracking him down.

At the bank, Judy questions Lance about the life insurance papers he delivered. He says he delivered them to his boss, Louise and that they should talk to her as he has to go to the bathroom.

Judy and Nick find Louise and question her about the insurance papers. Louise explains that she is Victor's insurance agent, and that she was in charge of Victor's finances. She declares that the information Judy and Nick are looking for is "strictly confidential".

Judy and Nick search the bank and find more documents which are signed by both Victor and Louise. They question Louise again about the documents, and Louise says she is the insurance agent and any important documents would, of course, be signed by her. When asked what is in the documents, she explains that the contents of the documents are "a comprehensive rundown of the various appendices relevant to a legal document of this nature".

After piecing the broken gold link pieces from before together, Hurriet analyzes it and identifies it as a broken gold watch that was worn by the guilty suspect. The lab also analyzes the paw print on the document and Clawhauser declares the suspect has two-inch paws, and they also tested positive for "Zoo Croo Fur Styler" residue, meaning the suspect is also well groomed.

While searching the hospital room again, Judy and Nick examine a train schedule and a receipt for a train ticket in Savanna Central Station leaving that day. There are also prints on the schedule that belong to Kevin.

They question him about the schedule and Kevin says that Victor had it when he checked in, along with a receipt and he held them for safe keeping. Kevin freaks out again and asks if this was okay to do, saying that if he gets in trouble, his mother will be mad at him, and then he will be in "real trouble". Judy assures him that she and Nick will take the receipt and promise not to tell his mother.

Nick notices that the receipt says the ticket was sold by someone named Janine. When he and Judy go to the station to question Janine, he asks her about the train ticket bought by Victor. Janine says that Victor came to pick up the ticket a minute ago. She goes on to tell a confused Judy and Nick that Victor is actually there at the station too.

Judy and Nick approach Victor question him on why he was pronounced dead in the hospital. Victor seems surprised at this revelation, saying that he's "fit as a fiddle." They go back to the hospital and find a pile of medical records. They find Victor's medical record and learn that he has amnesia and narcolepsy. Judy asks Victor if he could have been wrongly presumed dead because of his narcolepsy. Victor says he falls asleep pretty deep and is hard to rouse. Nick asks if this is "playing possum", and Victor says that it could indeed be called that. He goes on to say how he wakes up in the strangest places, often a hospital, and he let himself out this time.

Later, Judy and Nick find a bank ID and its ID number at the station and at the bank. After researching the bank ID and password in the lab, they learn that the ID number belongs to Louise. They talk to Louise again and question why her bank ID was at the train station. Louise answers that she was catching a train.

At Savanna Central Station, Judy and Nick discover a deposit slip for a life insurance payout cashing in on Victor's "death". The lab analyzes the slip and discovers that the ATM used to gain the deposit slip was a rodent ATM that could only be used by tiny mammals. With this evidence, Judy and Nick arrest Louise for taking out life insurance policies on Victor, faking his death, and collecting the money, which Nick says is the "oldest trick in the book".

Louise admits she has been raking in thousands of dollars insurance fraud from Victor, who kept "dropping dead" and never remembered it. Nick comments that this has been the strangest case of "playing possum" he has ever seen.

After the case is solved, Chief Bogo congratulates Judy and Nick on solving the case and tells them to check on the other suspects. Judy agrees, saying it is their job to protect and serve. Victor asks Judy and Nick to find his medicine for his amnesia at Savanna Central Station then he forgets what he was talking about and asks who they are. Judy and Nick find a pill bottle in a garbage bin, and after cleaning it up, they return it to Victor, who has forgotten about them and the medicine.

Kevin asks Judy and Nick to retrieve his "Alpha Quill", saying that he left it in the hospital, and the police won't let him in. Nick says they will look for it if Kevin tells them what an "Alpha Quill" is. They find the broken quill, and fix it before returning it to Kevin. Kevin finally reveals that this "Alpha Quill" is the very first quill he ever grew that his mother saved for him, and he has kept it ever since. Nick finds this "touching and weird".

Lance tells Judy and Nick he left his favorite salt chew, with exactly 4,127 licks on it, at the bank. They find a paper bag containing the salt chew, much to Judy's disgust. The lab analyzes the salt chew and it has 4,128 licks on it, because Clawhauser licked it, just to taste it. They return it to Lance and says that his last salt chew lasted 27,824 licks. Nick says he's filing it under "things he should forget". 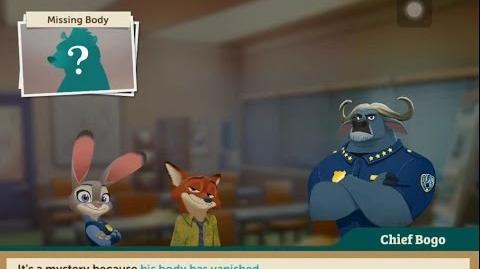 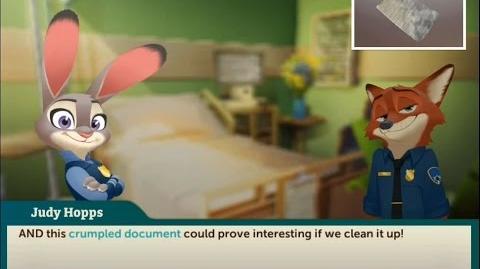