This article is about the figure set. You may be looking for the film characters, Mr. Big and Koslov.

Figures are 4 inches and 1 inch tall

The Mr. Big and Koslov figure set is a set of two rubber figurines based on characters from Zootopia.

"Tundratown is the coldest district in Zootopia and is home to Mr. Big, the toughest and shrewdest crime boss around. And do not be fooled - his polarizing henchman Koslov shouldn’t be messed around with either. The figures are in scale with all of the other Zootopia Character Pack Figures. Collect the entire herd of the Zootopia Character Pack Figures and Vehicles so you can recreate the scenes from Zootopia!"[1] 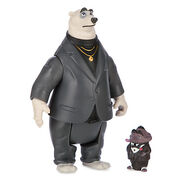