“My husband has been missing for ten days. His name is Emmitt Otterton. He's a florist. We have two beautiful children. He would never just disappear.”
―Mrs. Otterton

Mrs. Otterton is a female North American river otter and a supporting character in Zootopia. She is the wife of Emmitt Otterton and the mother of their two children.

"Mrs. Otterton is a desperate otter who turns to Officer Judy Hopps for help in solving her husband's mysterious disappearance."[2]

Mrs. Otterton is a slender river otter with sleek brown fur. She has large green eyes, a small, pink nose, and whiskers on her muzzle and head. Her movements are very sleek and gentle, as if she is swimming underwater.

Mrs. Otterton is seen wearing two different outfits in the film. Her first outfit consists of a lavender shirt, black pants and an intricately-patterned lilac cardigan. She wears this when she is first seen in the film and at the end, when she is dancing with Emmitt. Her second outfit consists of a pale blue shirt, and a patterned powder blue cardigan. She is seen wearing this as she watches her savage husband prowling around his hospital room, and when she watches him wake up from his treatment. 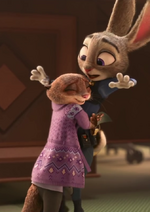 Mrs. Otterton is a gentle yet emotive otter, feeling an extreme amount of sadness and concern, originally for the missing status of her husband, Emmitt, and later about his savage status. She appears to be on the brink of tears both while in Chief Bogo's office and while observing the state of Emmitt's health and sanity. However, she shows a very different, far more elated side of her personality once Judy takes the case, hugging her tightly and finding comfort in the hope that Emmitt could be found safe and sound. Her concern seems to be for others rather than herself, pointing to a selfless attitude.

Mrs. Otterton is first seen with Officer Clawhauser when Judy Hopps brings Duke Weaselton to the ZPD, asking to see Chief Bogo. Clawhauser replies to her that she will have to wait to be called in like everybody else. Clawhauser also contacts Bogo about her visit but the chief, who is not eager to confront emotional and desperate family members of the missing mammals and is talking to Judy, simply says "not now".

Despite this, Mrs. Otterton manages to bypass Clawhauser, who attempts to catch her but fails due to her being too slippery. She heads to Chief Bogo's office and pleads with him to have someone find her husband, Emmitt Otterton, one of the missing mammals, who has been missing for ten days. Bogo tries to explain to her that their detectives are very busy at the moment, but Judy, who feels sorry for her, volunteers to find him, which prompts Mrs. Otterton to hug her and thank her profusely. She then gives Judy a picture of her family and asks her to bring Emmit back home. Bogo then asks Mrs. Otterton to wait outside, which she does, and mere seconds later attempts to fire Judy, but before he can do that officially, he sees Mrs. Otterton with Bellwether outside his office. Bellwether tells how Judy is helping find Mrs. Otterton's husband and contacts Mayor Lionheart about this. After they both leave, Chief Bogo, knowing that Lionheart will be furious if he finds out Bogo fired Judy, reluctantly gives Judy 48 hours to find Emmitt, or she'll resign.

When Emmitt is found and brought into the hospital in a savage state, Mrs. Otterton is heartbroken as she looks upon him through a glass window, sadly stating that this isn't the Emmitt she knows.

The reason for her husband's savagery is later revealed to be the result of Bellwether's conspiracy centered around the Night howlers, and an antidote for the affliction is provided for all its victims shortly after Bellwether's arrest. Upon being cured of his savagery, Emmitt wakes up in a hospital room where Mrs. Otterton is waiting for him. She hugs him deeply, happy to have her husband back, and thanks Judy. During the credits, the otter couple is seen dancing happily at Gazelle's concert.

Emmitt Otterton is the husband of Mrs. Otterton and the father of their two children. Mrs. Otterton clearly loves her husband deeply, evident by her tearful worrying and continuously coming down to the ZPD, asking questions about the investigation of her missing husband. When he was found, Mrs. Otterton is very saddened to see her husband in a savage state. When Emmitt is cured, Mrs. Otterton hugs him deeply, happy to have him back. At the Gazelle concert, the Ottertons happily dance, and he twirls and catches her.

Mrs. Otterton is the mother of two young otters. When approaching Chief Bogo about the absence of her husband, she shows him a picture of their family. The Otterton children can be seen on it, and Mrs. Otterton calls them her "two beautiful children", showing that she loves them deeply.

Zootopia Wiki has a list of memorable lines and quotes spoken by Mrs. Otterton which can be found at
Mrs. Otterton/Quotes.

Zootopia Wiki has a collection of images and media related to Mrs. Otterton which can be found at
Mrs. Otterton/Gallery. 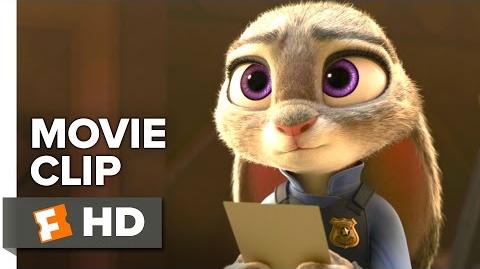