“Come on! He bared his teeth first!”
―The Muzzled wolf being brought in to the ZPD

The Muzzled wolf is a male wolf and a minor character in Zootopia. He is described as the "Zootopia version" of YouTuber Zach King.[1]

The Muzzled wolf is first seen near the beginning of the film on Judy Hopps' first day at the ZPD. He is seen being taken through the Police Department lobby by a tiger officer, as he protests through his muzzle that his opponent bared his teeth first, to which the officer rolls his eyes.

In a promotional video for the film, the Muzzled wolf is seen in a jail cell, looking innocently up at a rhino officer as he passes by. When the officer is gone, the wolf steps back and jumps through the cell bars, but in doing so he loses his clothes and is left in an undershirt and underwear. Frantically, the Muzzled wolf grabs his hat from the other side of the bars and holds it over his underwear as he runs away. This is another reference to Zach King, because every time he loses his pants, he puts his hands over his underwear.

"Come on! He bared his teeth first!" 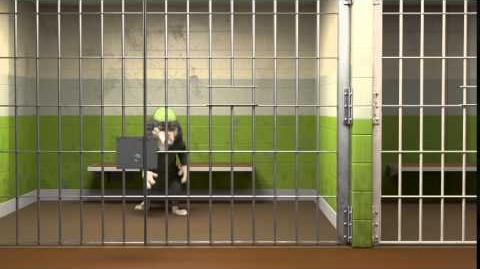