“Oh no. No, I didn't see Chuckles doing anything bad. Ever. No, he seemed like a real swell fella.”
―Neil, Jail Break!

Neil is a male panda in Zootopia: Crime Files. He is suspected of helping Chuckles escape from prison and ransack the ZPD. He appears in Case 9.

Neil is a large panda with white fur and black markings and ears. He wears a navy blue police uniform that includes a black tie. He almost always wears a friendly and pleasant expression.

Chief Bogo informs Judy Hopps and Nick Wilde that someone helped Chuckles escape from prison and he ransacked the ZPD. They search Clawhauser's desk and find a dirty key and a pamphlet for Sequoia Towers. Nick suggests that they talk to Neil, the jailer's assistant. 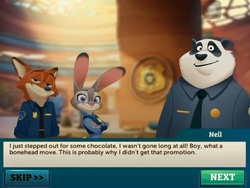 After cleaning the key, they see that it's a jail key and send it to Hurriet in the lab just to be sure. Later, Clawhauser tells them that it is indeed a jail key. Judy and Nick go to question Neil, and Nick asks Neil if he is good at his job, especially at letting Chuckles escape. Neil says he just stepped out for some chocolate and he wasn't gone long. He calls that a bonehead move and laments that he didn't get the promotion. Neil also says that Chuckles made a ruckus when he escaped and the ZPD briefing room is roughed up. Neil calls himself a bonehead again and Judy comforts him, saying Nick will do it and asks if anyone else was around last night. Neil says that Herbert the janitor was and thinks they should see if he's a witness. Later, Clawhauser tells them two things about the pamphlet. The culprit has a "keen interest in real estate" and there are strands of black and white fur on it. 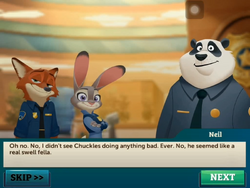 Judy and Nick search for more clues by Clawhauser's desk and find some sticky substance and a dirty note. After cleaning the note, they learn that it's a threat note to the ZPD. It says, "Dear ZPD, How are you? I am fine. You will all DROWN, DROWN, DROWN! Have a nice day." Nick wonders who's it from and decides they should ask Neil if Chuckles wrote it. They go to Neil and Judy tells him about the threatening note that sounds like Chuckles and asks if he saw Chuckles writing anything. Neil said he didn't see Chuckles doing anything bad and calls him a "real swell fella". Neil says he's always talked about real estate and been getting into the market myself. Nick sarcastically guesses that Neil has a "keen interest" in it. Neil says yes and tells them that his blood sugar is really low and he needs chocolate. Clawhauser tells Judy and Nick that the sticky substance is chocolate and it's not his because he has different kinds of chocolate. Judy deduces that the culprit likes chocolate and the vise is tightening. They find another key in the briefing room city map and the lab analyzes it. The key has "Seal case" on it, and it is unknown who it belongs to.

At the briefing room, Judy and Nick find a torn piece of signed paper. They pieced it together, but it is hard to read through the burnt marks, so they send it to the lab. Clawhauser tells them that the note is a threat, saying, "Dear citizens of Zootopia, a certain habitat was overlooked in the city planning, an oversight which shall be remedied, in ways both extravagant and wet. Hahahahahaha." Judy knows that the joke will be on them if the author makes his plan a reality and suggests they question Phil, Chuckles' lawyer.

After talking to Phil about the note from Chuckles, Nick suggests they ask Herbert if he noticed any burned paper or maniacal laughter. They go to him and Judy asks Herbert if he smelled any burned paper the night of Chuckles' escape. Herbert says he didn't because it saves time, doing more work. Judy takes a chocolate wrapper from Herbert and has the lab analyze it. Clawhauser tells them that the wrapper has tasty chocolate in it and that it came from the ZPD holiday gift basket. Judy now realizes that the culprit works at the ZPD and thanks Clawhauser for cracking the case. 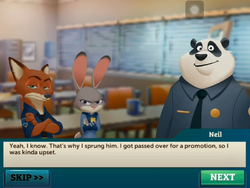 With enough evidence, Judy and Nick arrest the suspect for helping Chuckles escape: Neil. Nick says that he's performed the job rather poorly, considering his job was to keep him in jail. Neil admits that's why he sprung him out - he was upset that he got passed over for a promotion. He says that Chuckles said if he did it, he'd hook him up with a real estate deal that would let him retire. Neil says it's all good, but now it's not so much good. Judy asks him why he erased the surveillance footage. Neil replies that he doesn't know how. He says it would give me a good idea for next time, but changes the subject. Chief Bogo congratulates them for finding who helped Chuckles escape but now is not happy since Chuckles is still at large. Nick knows it was nice making him happy for a fleeting moment.

Zootopia Wiki has a collection of images and media related to Neil which can be found at
Neil/Gallery.

Retrieved from "https://zootopia.fandom.com/wiki/Neil?oldid=97208"
Community content is available under CC-BY-SA unless otherwise noted.