Nick's Convertible is a set of one rubber figure, a rubber parking meter, and a plastic car that are based on characters and objects from Zootopia.

"Nick Wilde is a smooth talker. After all, he is a con-artist. But after Nick receives a parking ticket for an expired meter from Judy Hopps, will he be able to talk his way out of the tight spot? It might not be so easy - it’s Judy’s first day on the job, and she’s determined to be the best meter maid ever. Nick’s 7-inch red convertible comes with a poseable 3-inch Nick Figure and a parking meter that is green on one side and red on the other. They are in scale with all of the other Zootopia Character Pack Figures and Vehicles. Collect them all so you can recreate the scenes from Zootopia!"[1] 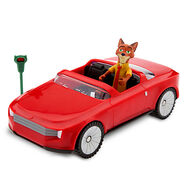 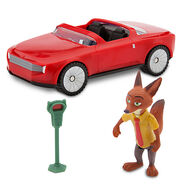 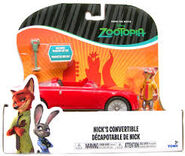