This article is about the figure set. You may be looking for the film characters, Nick Wilde and Finnick.

The Nick and Finnick figure set is a set of two rubber figurines based on characters from Zootopia. 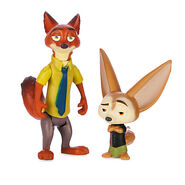