No Noise Is Good Noise

No Noise Is Good Noise is the third chapter in The Stinky Cheese Caper and Other Cases from the ZPD Files.

On her day off, Judy Hopps is at home watching the news. The news reporter discusses protests from the Outbackers over the new bridge, to which Judy turns off her television.

Meanwhile, Nick Wilde strolls past a strip mall as blaring music starts to play in a café. A wolf complains that the band playing is horrible, to which Nick agrees. Wondering if playing music this loud is a crime, Nick dials Judy's number and asks her to come over.

He explains the situation to Judy as she arrives, and Judy says that they can issue a warning to the band, as they are disturbing the peace. As Nick goes to tell the other store owners they are on the case, Judy enters the café. The café is cheerful and bright, but the room is littered with dirt and no one in the band is playing their instrument even remotely correctly. The speakers have also fallen onto the floor, but the crowd is dancing as if everything is normal.

Judy walks over to a table of card players, where a wombat warns her that this isn't her kind of place. Judy realizes that everyone in the café is from Outback Island and is upset about the new bridge. She tries to come up with something optimistic to say, but cannot.

Meeting back up in front of the dry cleaner's, Judy explains to Nick that the Outbackers do not want to talk to anyone that isn't of their kind. Nick comes up with a plan to pass himself off as a dingo and goes into the café to investigate. As he orders a root beer, a suspicious dingo approaches him and realizes he is a fox. Nick is then surrounded by more angry Outbackers, but Judy bursts into the room with her stun gun and calls for the owner of the café.

After Nick tells the owner that the other store owners in the strip mall are losing business over the loud music, the owner explains that the band is his nephew's, and that he let them play because it is good for his business. He says he will have the band stop and have the patrons make purchases at the strip mall's other stores to make up for the band driving away business.

Judy agrees, but says that they will be sending a health inspector over on account of all the dirt on the floor. As Judy and Nick walk back to the car, Judy laments on how the Outbackers and the other citizens of Zootopia are divided, saying she hates to see the city like this. 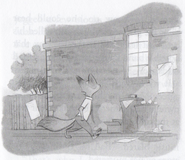 Retrieved from "https://zootopia.fandom.com/wiki/No_Noise_Is_Good_Noise?oldid=95915"
Community content is available under CC-BY-SA unless otherwise noted.