The Art of Zootopia[1]
Big Trouble in Little Rodentia

Offending other animals, being stereotyped, working in records

“I am so sorry. Me, Benjamin Clawhauser, the guy everybody thinks is just a flabby, donut-loving cop stereotyping you...”
―Clawhauser to Judy Hopps

Officer Benjamin Clawhauser[3][4] is a male cheetah and a supporting character from Zootopia. He is a member of the Zootopia Police Department, working as a radio dispatcher and secretary.

"Clawhauser loves two things: pop star Gazelle and donuts. From his reception desk, he greets everyone with a warm smile and a helpful paw—covered in sprinkles."

Clawhauser possesses a bubbly personality, characterized by enthusiasm, especially for his idol, Gazelle, and also, perhaps to a lesser extent, his job as the "first face that you see when you walk into the ZPD". He can be prone to overlooking some aspects of his job if some of his other passions are involved, such as when he didn't answer Judy Hopps' call due to being preoccupied with Gazelle. His interactions in regards to Mrs. Otterton show that he wants to do his job well, but is perhaps limited by things out of his control, such as Chief Bogo's somewhat dismissive personality or the sheer fact that very little progress was being made on the case in question.

While he has a friendly demeanor, his friendliness sometimes strays into making accidentally inappropriate remarks or going into in-depth conversations about trivial issues in the wrong times. He apologizes once he realizes that he causes offense, however, such as when he labels Judy Hopps as "cute."

He is very social and appears to love making new friends, as he was the first animal at the ZPD to greet Judy and at the time, the only one willing to be acquainted with her.

Officer Clawhauser is one of the shorter mammals working at the ZPD, though most of the animals there are fairly large, and Clawhauser still towers over Judy Hopps and other short-to-medium-sized mammals. He is very heavily-built, largely due to his love of donuts. He has a long tail, which tends to perk up when he is excited or cheerful. His fur is covered in black spots typical of cheetahs.

Clawhauser is first seen when Judy Hopps enters the ZPD headquarters for the first time. He is eating Lucky Chomps, but quickly puts those aside when he sees Judy. He is surprised that the ZPD really did hire a rabbit officer, and says that Judy is "even cuter than [he] thought [she]'d be", to which she explains that it's somewhat insensitive for larger mammals to refer to bunnies as "cute." He rescinds his comment, apologizing for any offense caused (and is forgiven). Judy then points out something in his neck, which turns out to be the doughnut he was missing, and he eats it immediately, slightly disgusting Judy. Clawhauser then directs her to the briefing room, saying to himself afterward that she probably wouldn't be able to survive the atmosphere created by all of the larger mammals around her.

Later on, he is seen talking to Mrs. Otterton, who has come in looking for any updates on the case surrounding her husband, when Judy brings in a weasel who she has arrested. As she is called up to Chief Bogo's office, the conversation with Mrs. Otterton continues, climaxing with Clawhauser telling the Chief about her visit and her escape from the conversation to talk directly to the Chief herself. Clawhauser evidently tried to stop her, but was unable, saying that she is "super slippery."

Mrs. Otterton begs the ZPD to find her husband and Judy volunteers. Chief Bogo sends Judy to retrieve the case file on Otterton's disappearance from Clawhauser. He unknowingly helps Judy uncover a key witness Nick Wilde, by using his soda bottle as a magnifying glass on the image, spotting Nick in the background after spotting Otterton holding a pawpsicle.

While Judy is on the case of Emmitt Otterton, being chased by Renato Manchas, she calls the headquarters, but a preoccupied Clawhauser is showing an arrested wolf the new Gazelle app, meaning that he does not immediately respond to Judy's call. However, once he has finished the demonstration, he responds to a now hysterical Judy, who notifies him of the current situation. He promises to send backup, but her radio is lost.

It is Clawhauser who would tell Bogo that Judy had successfully found all 14 of the missing mammals, but he inadvertently walks in on Chief Bogo playing with the Gazelle app, causing the Chief to become defensive, saying that he is working on the missing mammal cases. However, with the revelation that Judy has found them all, Bogo departs to travel to the Cliffside Asylum to see for himself.

After Judy's fateful speech which unfortunately incriminates all predators in the savage attacks later revealed to be caused by Night howlers, Clawhauser is relegated to maintaining records in the records room, as the ZPD's command thinks that it would be better if the first face that mammals see as they enter the department was not a predator. However, the attacks are revealed to be a plot orchestrated by Dawn Bellwether, the new Mayor. After Bellwether is arrested, Clawhauser is reinstated and is presented with two boxes of doughnuts by his colleagues, much to his joy.

At the end credits, Clawhauser is seen attending Gazelle's concert performance, glowing with excitement and dancing alongside Chief Bogo, who attends as well.

The officers of the ZPD are throwing a surprise party for Judy Hopps, but Clawhauser informs them that she is arriving ten minutes early. Back in the bullpen, Clawhauser notices that the cake for Judy spells her name with "i.e." instead of "y". Clawhauser uses his finger to smear the frosting away and then eats it. Just then, Chief Bogo announces Judy's arrival, and all the officers present Judy with her cake. Clawhauser says that they were wrong to doubt Judy's ability to solve the case of the missing mammals, and Judy sheds a tear of gratitude.

At the end of the comic, Clawhauser cheers for Gazelle and her dancers.

When Judy Hopps checks in at the ZPD, Clawhauser tells her that he saved her a carrot donut. He then says that if she doesn't want it, he will eat it. Judy replies "It's yours", before leaving for traffic duty. 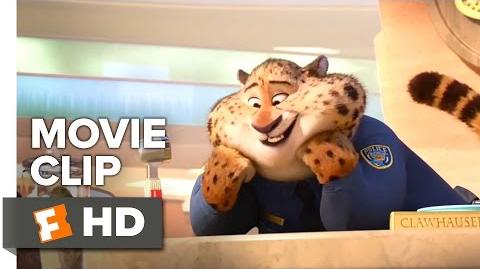 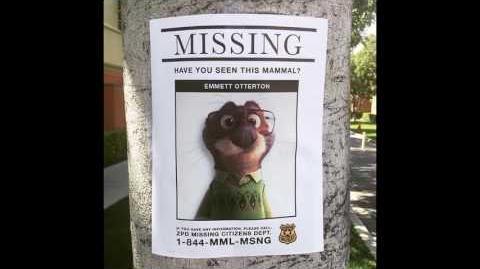