Officer Fangmeyer is a tiger[1] and a minor character in Zootopia. They work as an officer of the ZPD.

During the investigation on the 14 missing mammals and on Judy Hopps' first day on the beat, Fangmeyer is assigned with officers Grizzoli and Delgato to the Rainforest District to search for the residents missing there.

Following the Night howler scandal, and on Nick Wilde's first day on the beat, Fangmeyer is once again assigned with Officers Grizzoli and Delgato, but this time to Tundratown SWAT. 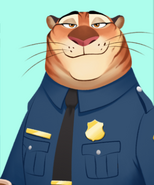 Fangmeyer as seen in the Australia version of Zootopia: Crime Files

Fangmeyer as seen in the US version of Zootopia: Crime Files