“First, we need to acknowledge the elephant in the room. Francine... happy birthday.”
―Chief Bogo to Pennington

Officer Francine Pennington[1] is a female African elephant who works for the Zootopia Police Department in Zootopia.

Francine appears in the bullpen when Judy Hopps arrives for her first day as a police officer.

She appears nervous when Chief Bogo says they need to address the 'elephant in the room', but sighs in relief when she learns Bogo just wants to wish her a happy birthday. In celebration, Officer Jackson starts playfully punching her side, prompting her to pick him up and give him a noogie.

When Judy informs the ZPD of the missing mammals at the Cliffside Asylum, she and the other officers arrive for a police raid on the asylum.

Near the end of the film, she and the rest of the ZPD come to the Natural History Museum to arrest Assistant Mayor Bellwether. 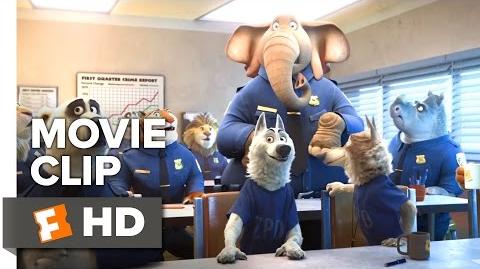