Zootopia Wiki
Register
Don't have an account?
Sign In
Advertisement
in: Characters with Unknown Genders, Characters, Film Characters,
and 8 more

This article is about a character with an unknown gender. Please refrain from adding a gender unless you have talked to an administrator first.

Officer Wolfard[1] is a Timber Wolf working for the Zootopia Police Department that is assigned to Precinct 1 in Zootopia.

During the investigation on the 14 missing mammals and on Judy Hopps' first day on the beat, Wolfard was assigned with Officers McHorn and Rhinowitz to Sahara Square to search for the residents missing there.

After Bellwether's scandal and on the first day of Nick Wilde's assignment to Precinct 1, Chief Bogo placed Wolfard on an undercover unit, alongside Snarlov and Higgins, where he would be disguised as a sheep.

Wolfard disguised as a sheep 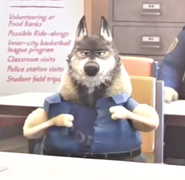 Wolfard putting on a sheep costume