Onçardo Boi Chá,[1] more often referred to as Boi Chá, is a male jaguar and a leading news anchor for ZNN in Zootopia.

The name Onçardo is a portmanteau of onça (portuguese for "jaguar") and Ricardo (after his voice actor, Ricardo Boechat). "Boi" and "chá" are mundane words in portuguese ("bull" and "tea", respectively), put together in order to resemble the pronounce of the surname Boechat (bo-ee-SHA), making fun of it.

Chá makes two brief appearances in the film, alongside co-anchor Fabienne Growley reporting on the news of Zootopia. 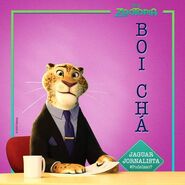