This article is about the raccoon. You may be looking for the groundhog.

“I'm a legitimate business mammal! You think I'm not? You think I'm a criminal just because I wear a mask?”
―Phil, Necklace Nabbers

Phil is a male raccoon in Zootopia: Crime Files. He is suspected of robbing the Tiger's Eye Jewelry Store. He appears in Case 5.

He returns as a lawyer in Case 9, suspected of helping his client, Chuckles, escape from prison and ransack the ZPD.

Phil is a raccoon with mostly grey fur. He has a white muzzle and ears, black rings around his brown eyes and a pencil mustache. His outfit consists of a white shirt, a blue suit, a blue flower-patterned tie, and gold cufflinks. Phil almost always has a haughty expression on his face.

While on the case of stolen necklaces, Judy Hopps and Nick Wilde learn from Wilfred and Leonard about the DMV appointment. They find a sale of good records and the signature was smudged and it is later revealed to be signed by Phil who is the business partner of Wilfred. Judy and Nick question Phil about the sale of goods record and the sports car of Wilfred he was selling. Phil corrects them by saying that he was trying to sell, but neither Wilfred or Leonard showed up at the DMV to close the deal. He says he's a legitimate business mammal and asks them if he's not and if he's a criminal because he wears a mask. Phil tells them to go search through trash for evidence and asks they are busy making assumptions based on looks. Judy agrees and they search the alley for more evidence.

Judy and Nick find a tiny donut takeout bag. The lab analyzed it and the bag belongs to Phil. They go to Phil again, and Judy asks him why the bag was found at the scene of the crime. Phil says he found it while rummaging through the trash. He says he's a raccoon and he loves garbage. Nick praises Phil for dispelling stereotypes.

It isn't long until they question Phil again. Judy says that whenever Phil is rummaging around in the trash, he finds interesting things and asks where is he heading next. Phil says it's true and that he makes a nice income from trash and says he was thinking about going to the DMV because their trash is full of "fascinating stuff". Judy and Nick go the DMV and find a trash can containing a velvet bag with the Tiger's Eye jewelry logo on it. Judy knows Phil is right.

After the case is solved, Phil says that while digging through the trash at the donut shop, he left some of his trash in one of the cans. Judy seems confused, thinking Phil would want them to find his trash at the donut shop's trash and Nick asks how much are they getting paid for this job. At the donut shop, they find a bag of trash. They search through it and find a pile of receipts with Phil's name on it. Judy wonders what they're for, but Nick just wants to return it to him. After returning the receipts to Phil, Judy asks what they are for and Phil says for trash as he bought quality trash the other day. Nick asks he bought trash and then put his receipts in the trash which he then lost during the trash and Phil says "Just another day for a raccoon" and thanks them. 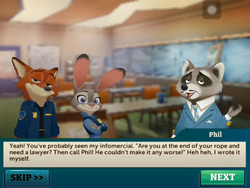 While searching for the suspect who helped Chuckles escape from prison, Judy and Nick find a display case made to contain the stolen seal for the Zootopia Planning Commission. Nick asks if Chuckles has a lawyer they can question and Judy says it's Phil, the "legitimate business mammal". They go to Phil and Nick asks him if he's a lawyer now. Phil says yes and asks if they've seen his infomercial that he wrote himself: "Are you at the end of your rope and need a lawyer? Then call Phil! He couldn't make it any worse!" Judy reminds Phil that last they met, he was arranging a meeting with Wilfred, who was arrested for stealing jewelry. Phil asks her if she's not still "mask-ist" and "holding preconceived notions against raccoons just because of masks". Nick tells him he's got enough notions against him without preconceived. He says his client, Chuckles, escaped from jail and asks if he knows anything about it. Phil says his clients don't tell him anything and the only thing Chuckles mentioned was something about Sequoia Towers. Judy remarks that Chuckles talks a lot about Sequoia Towers and suggests they search near the briefing room city map, to see if Chuckles left a clue. 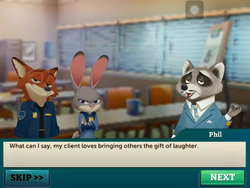 Later, they find a torn, singed note, which is a threat from Chuckles after the lab analyzed it. Judy knows that his plan will become a reality soon, and decide to question Phil. They go to him and Judy asks him if he knows anything about the maniacal laughter from the note. Phil says his client loves "bringing others the gift of laughter". Phil says he's got to go navigate through the treacherous waters of justice and he can't do it without chocolate, so he goes to the vending machines. Then Nick suggests they talk to Herbert about the note. 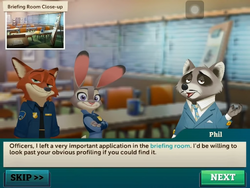 After the case is solved, Phil tells Judy and Nick he left a very important application in the briefing room and asks them to find it. Nick thinks they were being sly. They find a pile of folders and Judy thinks that this could have Phil's application in it. They find the application with Phil's name on it. Nick says it's full of "legal mumbo-jumbo" and has Clawhauser and the lab look at it. Then, Clawhauser tells them he read the application three times, because he thought it was the TV listing and it was confusing, and it says that Phil was rejected from law school. Judy argues that he's a practicing lawyer. Nick says Phil is many things to many people. They return the rejected law school application and Judy asks Phil how is he able to practice law. Phil says the law school application was just to "practice law" but he had enough practice, so he went ahead and started. Nick says that Phil is "good at being a bad lawyer".

Zootopia Wiki has a collection of images and media related to Phil (raccoon) which can be found at
Phil (raccoon)/Gallery.

Retrieved from "https://zootopia.fandom.com/wiki/Phil_(raccoon)?oldid=97176"
Community content is available under CC-BY-SA unless otherwise noted.