Disney Zootopia: Friends to the Rescue

“Foxes are red because they were made by the devil!”
―Pop-Pop (deleted scene)

Pop-Pop[1] (possibly named Otto Hopps[2]) is an elderly male rabbit in Zootopia. He is Bonnie Hopps' father, Judy Hopps' grandfather, and a member of the Hopps family. He lives in the Hopps family home in Bunnyburrow.

When asked whether Pop-Pop was Bonnie's father, writer Jared Bush replied that they "went back and forth on that",[3] but it was later confirmed through a newspaper article in the film.[4]

As of December 2015, there was a storyboard of Judy's phone call to her parents after her first day, in which "you could hear a crabby old bunny talk about how foxes were made by the devil". Judy would then reply, "That’s offensive, Grandpa."[5]

He joins the other members of Judy's family in wishing her goodbye and good luck when she moves to Zootopia.

Only having a speaking role in a deleted scene, he mispronounces Judy's name as "Trudy", and tells Bonnie to ask her if she has been eaten yet. Bonnie tells him that no one got eaten. He also states that foxes are red because they were made by the devil.

Otto Hopps' photo in the newspaper

Disney Zootopia: Friends to the Rescue 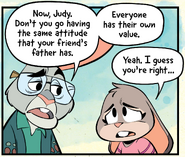