Cinestory Comic
The Noise from Next Door

“Don't expect us to apologize for it.”
―Pronk regarding his and Bucky's behavior to Judy

Pronk Oryx-Antlerson is a male oryx in Zootopia. He is one of Judy Hopps' neighbors, sharing an apartment with his husband[1] Bucky Oryx-Antlerson. They live in the Grand Pangolin Arms apartment building.

When meeting Judy for the first time, Bucky rudely informs her that they are loud, and Pronk adds that she shouldn't expect them to apologize for it. Moments after, Pronk is heard yelling at Bucky through Judy's wall. Judy, however, claims to love having "crazy neighbors".

The day after, he overhears Judy's conversation on the phone with her parents. When Pronk tells Judy to turn her radio down, Bucky tells him to leave her alone, as she feels like a failure. As both start to yell at each other to shut up, Judy tries to stay determined for another day, but Pronk comments that tomorrow might be worse.

The Noise from Next Door

Judy Hopps is up late watching a movie, when she hears a strange noise coming from Pronk and Bucky's apartment. After asking if everything is alright and getting a rude reply, Judy calls Nick Wilde and tells him of the situation. Nick, however, appears uninterested until Judy yells and drops her phone, causing Nick to express alarm. Judy knocks on the Oryx-Antlersons' door and asks if everything is okay, but Bucky quickly slams the door on her. Then, Nick and Officer McHorn arrive and McHorn knocks down the door of the apartment, where it is revealed that Pronk and Bucky are having a "pillow fight club" with some friends. Disgusted, Nick and McHorn leave, and Judy starts to leave too, but she hears Pronk and Bucky saying that Judy is not capable of protecting anyone anyway. Judy grabs a pillow and pounces playfully on the group, saying that not everything is as it seems.

Cameo with Bucky at The Mystic Spring Oasis

The Noise from Next Door 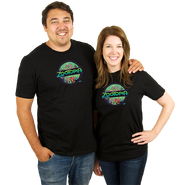