Shakira recorded an original song for the film called "Try Everything". She also played herself in the Wizards of Waverly Place episode "Dude Looks Like Shakira". 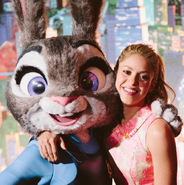