Skye was the deuteragonist of Savage Seas, an early version of Zootopia.

Skye is a fox with light tan fur. She wears a turquoise short-sleeved shirt and blue overalls. Her eyes are blue-purple.

In an early draft of Zootopia, Jack Savage, a jackrabbit that was set to be the main protagonist, had an assortment of vehicles and gadgets that, presumably, would be worked on and/or built by Skye. She would also come along on some of his missions, as evidenced by her appearances in the Savage Seas posters.

Two pieces of concept art depict her as a mechanic and wearing scuba gear respectively, the latter of which presumably for diving with Jack, as depicted in a poster for Savage Seas. 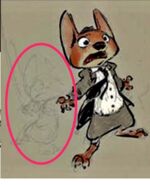