This article is about the chapter. You may be looking for the book that contains this chapter.

While on traffic duty, Judy Hopps and Nick Wilde confront Wulfric, who had just gotten into a fender bender. Wulfric, who was driving with his head out the window, attributes this habit to the new Wind Tunnel ride at the amusement park Wild Times that has invoked his desire to always feel wind blowing in his face.

Officer Clawhauser alerts Judy and Nick via radio that the Chez Cheez warehouse has been robbed. He tells them that no one else wanted to take on the case on account of this robbery being a "stinky cheese robbery". Judy is excited to take on the case regardless, determined not to let bad smells get in the way of her doing her job.

On the way to the warehouse, they see a new bridge under construction over the bay. Nick mentions that the Outbackers, residents of Outback Island, are unhappy with this bridge and are calling it "The Bridge to Everywhere Except Outback Island".

At the warehouse, Judy and Nick meet with Vince Mousawitz, the manager of the warehouse, which strongly smells of cheese to the point where Judy has to cover her nose. Judy takes some of the cheese and puts it in an evidence bag. Vince explains that the thieves came in through the back of the warehouse, but the security cameras were disabled. He goes on to say that this cheese is one of the restaurant's best sellers and that even losing a few scraps of it will hurt their profits.

When Judy and Nick get back in their car, Nick examines the photos of the paw prints he took while at the warehouse. As he does some research on his laptop, the two see that they are weasel prints, prompting them to locate and question the crime-savvy weasel, Duke Weaselton.

Following a "word on the street" about Duke finding a way to win some games at Wild Times, Nick suggests they look for him there. At Wild Times, they spot Duke and corner him. Duke says he was at a warehouse other than Chez Cheez's, and that a foul-smelling sports car passed by him. Nick thinks the driver could be behind the robbery, and Duke says that the car went onto the Meadowlands highway.

Back in their car, Nick finds a report from a prison about how prisoners were evacuated from solitary due to a bad smell. They drive to the prison in question to interrogate the warden.

At the prison, the Jaguar warden explains that only one prisoner - a platypus - was evacuated. Judy asks if there were any witnesses, to which the warden says there was only himself there at the time. He says that someone drove up to the prison wall in a sports car and threw some cheese over it. Nick asks if he was able to get a good look at the suspect, but the warden says that he can only tell that they were a canine.

Later, the paw prints from photos Nick took are revealed to be from a dingo. Judy says she saw a dingo at Wild Times when they went earlier. The two head back to Wilde Times and spot the dingo. When Judy calls out to the dingo, he runs away to his sports car and drives off, confirming that he is guilty.

Judy and Nick get into their car to catch up with the dingo, when the dingo's car crashes. Judy and Nick successfully arrest the dingo, who is taken back to the ZPD and appears to confess to the crime, saying he stole some fancy cheese that he wanted for a dinner party, but couldn't handle it's smell and threw it out his car window.

Judy congratulates Nick on a job well done and resolves to "get rid of this smell". 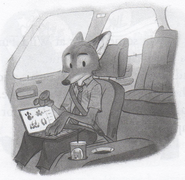 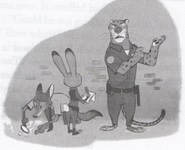 Retrieved from "https://zootopia.fandom.com/wiki/The_Stinky_Cheese_Caper?oldid=84557"
Community content is available under CC-BY-SA unless otherwise noted.