There's Dirt In Your Eye

There's Dirt In Your Eye is the second chapter in The Stinky Cheese Caper and Other Cases from the ZPD Files.

After the cheese incident, Judy Hopps and Nick Wilde are put back on traffic duty, this time assigned to the Meadowlands Highway. Nick complains about their assignment, and Judy, wanting to solve another case, radios Officer Clawhauser to ask if there is anything to investigate. Clawhauser replies that information of an incident just came in involving someone dumping dirt off of the old bridge, which landed on a boat full of tourists.

At the scene of the incident, Judy and Nick question the tourists, who say they didn't see the culprit because their attention was on the city and not the bridge. The tour guide explains that the bridge in question is the Old Outback Bridge, which leads to Outback Island.

As they walk up to the area where the dirt was dumped, Judy and Nick see some of the dirt left on the bridge. Nick smells perfume on the bridge, and finds some strands of fur and a rhinestone, which he puts in an evidence bag. They spot a café on the shore of Outback Island, and decide to visit to see if anyone witnessed the crime and if the security cameras recorded it.

At the café, Sheila offers to take their order. She says business at her café has been slow since the construction of the new bridge started. As she hands them their menu and leaves to get them water, Judy and Nick discuss the case. Nick questions whether dumping dirt off the bridge is actually a crime, to which Judy says dumping anything off a bridge is dangerous, and that the tourists could have been blinded by the dirt.

As Sheila returns, Judy asks her if she witnessed the dirt-dumping culprit, to which Sheila denies. Later, as she serves them their meals, Nick asks Judy to close the bag that contains the fur that smells of the perfume. Judy says she left the bag in the car. Nick sniffs again and follows the scent, discovering it is coming from a kangaroo waitress. The waitress says the perfume is called Eau de Outback, which she recently obtained at the Marsupial Marketplace. Nick hurries back to Judy, telling her they now have a lead. While Judy is skeptical, she complies.

Officer Charles, the security guard, shows them security footage from earlier in the day, which shows a kangaroo wearing rhinestones purchasing the perfume. Instructed to switch to the outdoor cameras, Charles zooms in on the license plate of the car the kangaroo gets into. After searching the police license plate, they find that the kangaroo that owns the car is named Dorothy.

Judy and Nick arrive at Dorothy's address. They knock on her door and she opens it, at first denying having done anything. However, after they show her the rhinestone she left behind, she says that she is starting a garden and accidentally spilled the bag of dirt she bought from the Rainforest District while carrying it across the bridge. Unable to arrest her for an accident, Judy and Nick let her off with a warning.

Shortly after, Judy radios Clawhauser to tell him the case is solved and head back to the ZPD to fill out their report on it. 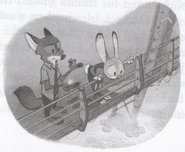 Retrieved from "https://zootopia.fandom.com/wiki/There%27s_Dirt_In_Your_Eye?oldid=80284"
Community content is available under CC-BY-SA unless otherwise noted.