Tommy Chong (born May 24, 1938) is a Canadian-American actor, musician, and comedian. He voices Yax in Zootopia.

Chong is most widely known for his role in the Cheech & Chong comedy movies with Cheech Marin. He also played Leo Chingkwake in That '70s Show.

On September 4, 2014, Chong was announced as one of the celebrities participating on the 19th season of Dancing with the Stars. He paired with professional dancer Peta Murgatroyd. Despite being at the bottom of the leaderboard numerous times, Chong and Murgatroyd were able to make it to the night of the semi-finals but were eliminated at the end of that night. Chong is the oldest contestant to have made it to the semi-finals of the show. 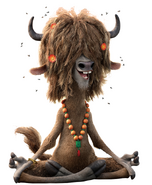