This article is about the rabbit in Zootopia: Crime Files. You may be looking for the character in The Official Zootopia Handbook.

Tony is a male rabbit in Zootopia: Crime Files. He is suspected of helping Chuckles escape from prison and ransack the ZPD. He appears in Case 9.

Overall, his physical features strongly resemble those of Judy Hopps', albeit longer and sharper. 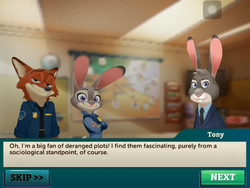 While searching for the suspect who helped Chuckles escape from prison, Judy Hopps and Nick Wilde find a torn pamphlet of Sequoia Towers and after piecing it together they learn from the lab and Clawhauser that the name on it is Yolanda. The zebra says she got it from Tony the juror, who's into Sequoia Towers and will talk their ears off about it. Judy, having a lot of ear, decides they should chat with Tony. They go question Tony, who says he's an expert of Sequoia Towers, which is the plot of a deranged lunatic. Tony says he's a big fan of deranged plots and finds them fascinating purely from a sociological standpoint. He also says he loves it when those deranged plots dovetail with his "keen interest in real estate". Nick, annoyed, plans to arrest him, but Judy calms him down and suggests they look for more clues by Clawhauser's desk. 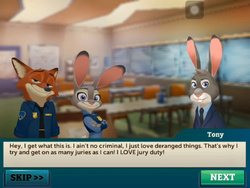 After a talk with Detective Oates, Nick suggests they talk to Tony again and look in the briefing room. They go to Tony, with Judy saying he was suspicious and they wanted to check back and say hi, which she does. Tony says he's no criminal, claiming that he just loves deranged things, and gets on as many jury duties as he can, adding that he also loves jury duty. Nick says that Tony himself is deranged. Tony then says he goes to so many trials, that the only thing that keeps him on his feet is all the chocolate he gets from the vending machines. Judy, wanting to get away from Tony, suggests to Nick that they look closely at the city map in the briefing room. 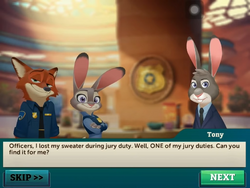 After the case is solved, Tony tells them he lost his sweater during one of his jury duties, and asks them to find it for him. Judy says that the lost and found is by Clawhauser's desk and they're happy to check it. Judy and Nick find a cardboard box which is the lost and found. Knowing that it's a trove of treasures, they dig through it and find a cardigan, which Nick says is the size of a crime-obsessed rabbit. They send it to the lab to analyze. Clawhauser tells them that the cardigan belongs to Tony, after looking at the name tag. Judy admits that though Tony is a bit odd, his fashion sense is quite sensible. They return the sweater to Tony, who thanks them, saying it gets cold sitting in all those juries. Nick says that when deciding the fate of others, it's important to be comfy.

Zootopia Wiki has a collection of images and media related to Tony (rabbit) which can be found at
Tony (rabbit)/Gallery.