“It's the ride you can't refuse.”
―Mr. Big, The Official Zootopia Handbook

Tundratown Limo Service is a company run by Mr. Big in Zootopia. It is located in Tundratown.

Judy Hopps first hears about Tundratown Limo Service when she and Nick Wilde visit the DMV. After about eight hours of haggling with Flash Slothmore, Judy learns that the car that Emmitt Otterton got into after leaving the Mystic Springs Oasis is registered there.

When Judy and Nick arrive, the lot is closed for the night and Judy doesn't have a warrant to get in. After tricking Nick into helping them both get inside, Judy locates the car that Otterton rode in. They climb inside and learn that Otterton was indeed there due to the presence of his wallet. Claw marks all over the seats suggest he had been attacked (or so they thought).

Nick then realizes - after discovering polar bear fur, rat pack music, and a fancy glass cup with a B imprinted on it - that the car belongs to Mr. Big, "the most feared crime boss in Tundratown". Nick tries to get Judy to leave with him, but are halted by Kevin and Raymond, who take them to Mr. Big himself. 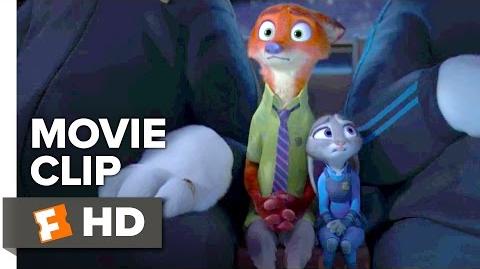 Retrieved from "https://zootopia.fandom.com/wiki/Tundratown_Limo_Service?oldid=101403"
Community content is available under CC-BY-SA unless otherwise noted.