For today's topic, I would like to talk about Jerry Jumbeaux Jr. 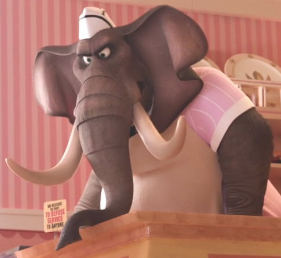 Apologies for not doing this on Saturday.

Jerry Jumbeaux, Jr. is a male African elephant who owns Jumbeaux's Café in Zootopia. He is first shown in his café, refusing service to Nick Wilde and Finnick due to the fact that they are foxes, and are thus deemed untrustworthy.

Despite Nick's begging, Jerry points to a sign with the words "We reserve the right to refuse service to anyone", and demands that they leave. However, Judy Hopps, working as a parking enforcement officer across the street and attracted by Nick's seemingly shifty behavior, overhears the argument, points out the cafe's health code violations and threatens to have the cafe shut down unless Jerry agrees to give Nick proper customer service.

Jerry eventually relents and allows Nick to buy a Jumbo-pop. However Nick claims to not have his wallet, causing Judy to purchase the Jumbo-pop for them.

Now, it appears that Jerry is supposed to be a depiction of restaurant workers from the 1940's, who refused to serve non-white individuals.

In the originally animated, but ultimately deleted version of the scene in his café, instead of refusing service to the two foxes because of their species, he makes the rational argument against selling to Nick and Finnick that their smaller stature would prevent them from eating such a large amount of ice cream in a single sitting, resulting in it mostly melting and making a mess. The scene was presumably changed to the current version with a more racist Jerry to better portray Nick in a sympathetic light.

Jerry's name is a reference to the Disney movie Dumbo, in which the titular character is initially given the name Jumbo Jr.

I didn't like Jerry, because of how mean he was to Nick and Finnick. I mean, sure, he was right about them not being completely honest, but that still didn't warrant the need to belittle the foxes. Fortunately, Judy cut him down to size.

Retrieved from "https://zootopia.fandom.com/wiki/User_blog:Kbwwe21/Z.A.P._69?oldid=97246"
Community content is available under CC-BY-SA unless otherwise noted.