Vassos Alexander is a British newscaster, sports reporter and commentator. He voices Moosos Alexander in the England-dubbed version of Zootopia released in the UK.

In the film, Moosos Alexander is simply Peter Moosebridge but with a different name and dubbed with Vassos's voice instead of Peter Mansbridge.

Before joining Radio 2, Alexander presented the sport on the 5live Breakfast Programme for three years, during which time he went to the 2010 FIFA World Cup, the 2008 Beijing Olympics, and the 2010 Vancouver Winter Olympics.

He replaced Tony Green at the 2011 BDO World Darts Championship and returned the following year in a three-man rotation with Green and David Croft. He has remained a Lakeside commentator ever since. 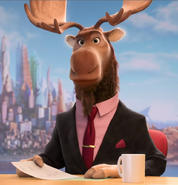 Peter Moosebridge
Add a photo to this gallery

Retrieved from "https://zootopia.fandom.com/wiki/Vassos_Alexander?oldid=97989"
Community content is available under CC-BY-SA unless otherwise noted.