Not to be confused with Wulfric.

“Being out of jail is not against the law, officer.”
―Wilfred, Burgled Berries

Wilfred is a male wolf in Zootopia: Crime Files. He is suspected of robbing the Tiger's Eye Jewelry Store. He appears in Case 5.

He returns in Case 8, suspected of robbing multiple shipments of bogberries and was mentioned in Case 9.

Wilfred is a tall wolf with thick gray fur and a white muzzle. He has thin, pointy ears, a large black nose, and sly-looking hazel eyes. His outfit consists of a white shirt and a black tuxedo, and his left paw is bandaged.

While on the case for the stolen necklaces, Judy Hopps and Nick Wilde learn from security guard Donna that he met with a gerbil named Dinks. Judy and Nick question him about it. Wilfred says a wolf of his stature has business dealings with many strata of society. He and Dinks exchanged pleasantries, then he departed. He was meeting his business partner at the DMV along with a potential buyer, an antelope named Leonard for his sports car, that Nick thinks the car is Leonard. Then he leaves them. Judy thinks that Leonard has a lot of cash if he's buying sports cars and is suspicious on why Wilfred needs a lot of cash. They learn from Leonard that he does have loads of cash but he didn't buy the sports car because Wilfred missed the DMV appointment with his business partner.

At the DMV, Judy and Nick find a pile of shredded papers which turns out to be a sale of goods records. Judy can't make out the signature but she suggests that Wilfred would know. They ask Wilfred about the sale of goods record, as Nick knows, and asks what's it for. Wilfred says it's a bill for the car he wanted to sell to Leonard through his business partner. He asks why is it pieced together with tape. Judy dismisses the question and asks who is this business partner. He said the signature is on the record and sarcastically asks why are they getting paid if he's doing their job for them. Nick calms him down and says the signature is smudged so they'll have the lab clean it off and says he's not getting paid.

They later find a piece of scrapped cloth in the alley which turns out to be a piece of fine cloth. They learned earlier that a broken jewelry lock had traces of fur on it and that the culprit wears gold jewelry. At the DMV, they find a velvet bag with the Tiger's Eye Jewelry logo on it and learn that the zipper has claw marks on it. While searching the donut shop, Clawhauser tells Judy and Nick someone turned in a wallet at the station and it belongs to Wilfred. They search the wallet and find a greasy note and a greasy ATM receipt. After cleaning them, they discover the note is an IOU with Wilfred's name on it. And they learn that the ATM receipt says that Wilfred is broke. Judy thinks robbing a jewelry store would help him and is interested about it.

When questioning Wilfred, Judy says they search his wallet as part of a legal investigation and asks him about the IOU. Wilfred is enraged by it, but says things are a bit slim on the "cash in hand" department and his spending habits are on the lavish side. Nick thinks someone's low on money would benefit from a sudden influx of necklace goodness.

With the pieces fallen into place, the suspect is furry, has claws, wears fine clothing, wears gold jewelry, and is broke, Judy and Nick arrest Wilfred for robbing the necklaces. Wilfred could no longer keep up this ruse and he admits it, saying he needed a large amount of cash for a new business venture, the Sequoia Towers condo project. He also said the individual running it wouldn't take a loan, only cash as he is demanding. Judy asks who's running the Sequoia Towers project and Wilfred angrily says no more questions and demands to go to prison. 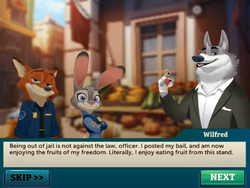 While searching for clues for the suspect who robbed shipments of bogberries, Judy and Nick learn from Cleo that Wilfred stands around her Juice Bar looking "totally suspicious". They go to him and ask him why is he out of jail. Wilfred tells them that being out of jail is not against the law. He posted his bail and is now enjoying the fruits of his freedom, literally tasting the fruits from the fruit stand. Wilfred tells them that Cleo is upset with the fruit stand, telling them that's a motive and shoos them. Judy tells him he doesn't shoo them and he doesn't have a history of being truthful, but she says they'll follow up on his tip and search the juice bar. 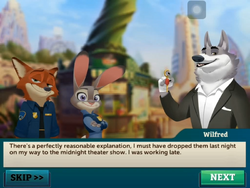 Later, at the juice bar, they find opera glasses. They find a monogram "W" etched on the side. Judy asks who do they know who's rich, snooty, into illegal activities, and just recently spoke to. The lab analyzes it, Clawhauser tells them they'll never guess who the monogram is from and Judy guesses it's Wilfred. They go to Wilfred and ask him why his opera glasses are at the juice bar that's connected to the crime. Wilfred says he dropped them last night while on his way to the midnight theater show. He was working late. Judy didn't know he worked, but the fact that he's a theater fan who works late is very interesting. 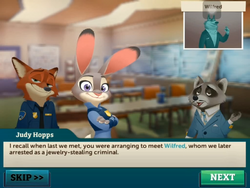 Although he didn't appear in the case of Chuckles escaping prison and ransacking the ZPD, Judy reminds Phil that she and Nick last met him when he was trying to arrange a meeting with Wilfred, who was arrested for jewelry robbery.

Zootopia Wiki has a collection of images and media related to Wilfred which can be found at
Wilfred/Gallery.