Zootopia: As Told By Emoji is a short animated film, based on Zootopia. It tells the story of the film in a short version within the confines of a mobile phone.

The film begins with a phone by showing Judy Hopps on top of two speech bubbles that say "Welcome to Zootopia... Where anyone can be anything!"

Chief Bogo then appears and Judy hops down to greet him and displays a ZPD badge emoji. Chief Bogo shows his disapproval by doing a meter maid vest emoji and then a "100 tickets" emojis, to which Judy looks annoyed.

Judy suddenly has an idea (a lightbulb emoji) and displays a "200 tickets" emoji; she bounces down the screen and zips back and forth between car emojis, putting tickets on them. When she has put a ticket on the last car emoji, Judy notices Nick Wilde acting suspicious and ducks behind the car emoji, watching him.

Jerry Jumbeaux, Jr. appears and Finnick - in his elephant costume - jumps out of a speech bubble to join Nick. Judy looks delighted and Nick displays a Jumbo-pop emoji, to which Jerry displays a "no foxes" emoji. Nick looks disappointed and Finnick starts to cry, but Judy jumps down and displays a money emoji; Jerry takes the money with his trunk and replaces the emoji with a Jumbo-pop emoji.

Nick, Judy and Finnick grin and Judy gives Finnick the Jumbo-pop. Then, Nick and Finnick hop past Savanna Central and Sahara Square emojis and Finnick "poofs" into a fennec fox with sunglasses;

Judy looks horrified, then annoyed. Nick shrinks the Jumbo-pop into a pawpsicle, then copies and pastes it over and over again, feeding them to the lemmings, who rapidly appear and throw Nick their money. Judy jumps down - looking angry - and displays the ZPD badge emoji, to which Nick sticks out his tongue and displays a halo emoji.

Suddenly, an alert pops up on the screen that says "Otter Alert: Missing Otter! (Savanna Central)" and shows a picture of Emmitt Otterton. Then, Judy, Chief Bogo, Assistant Mayor Bellwether, Mayor Lionheart, and Officer Clawhauser are all standing side by side. Judy, Bellwether and Lionheart all do ZPD badge emojis and Clawhauser displays a donut emoji, looks embarrassed, and then changes it to a badge. Chief Bogo looks annoyed but does the same.

Judy hops through Savanna Central, Sahara Square and more of Zootopia, then lands on Nick's head; Nick looks annoyed. Judy, through emojis, asks him if he's seen Otterton and Nick - looking smug - replies with a clock and money emoji. Judy plays a "tax evasion confession" through her carrot pen emoji and Nick sweats nervously. Nick glares at Judy, but they hop down to Yax; Judy asks him if he has seen Otterton and Yax gives them a plate number emoji: 29THD03.

Judy and Nick then hop down to Flash and Nick says the plate number. Flash nods, turns to his computer and displays

the "waiting" emoji. Judy looks annoyed and suspicious and asks for the plate again; Flash continues to work slowly at his computer - all the while Nick looks content. Flash then displays a "9" speech bubble and Judy, exasperated, displays five more plate number speech bubbles. A notification then appears and says "Six Hours Later".

The notification disappears and Judy (suspicious) and Nick (worried) are seen with Mr. Big and his polar bears. Judy displays an Otterton emoji and Mr. Big replies by saying "Mr. Manchas" in a speech bubble and doing a Manchas emoji. Judy looks pleased and she and Nick hop over to the "New Contacts" section of

the phone, where Manchas is standing. Judy looks carefully at Manchas' Known Associates, which is "Night howlers", and suddenly Manchas trembles, opens his eyes and snarls menacingly at Judy and Nick. He then proceeds to chase them all over the New Contacts section.

Manchas is just about to pounce on the pair when Judy jumps onto the "Block This Caller" button and she and Nick are transported to a different area of the phone. Judy thinks for a moment, then displays a "Night Howlers" speech bubble, a lightbulb emoji and then another speech bubble that says that "Night Howlers" equal wolves howling at night (a wolf emoji howling at a moon emoji). Judy and Nick hop down to Larry and Gary and begin howling and the wolves join in, allowing Judy and Nick to sneak down to where cages containing savage animals are located.

Looking displeased about the ordeal, the pair hop closer to a cage containing an animal, who reveals himself to be

Judy, happy, then hops over to a stage with a blue curtain and selects a podium with a microphone from her emotions. She displays a warning sign emoji and then various emojis, all showing Otterton, Lionheart, Manchas and then Nick going savage. The screen slides over to Nick, who looks hurt. Judy hops down from the stage, realizing her mistake, and displays a peace sign emoji. Nick smiles in return and displays a shrugging emoji; he and Judy bump heads affectionately.

Judy then displays a speech bubble saying "Night Howlers" and copies and defines it. Judy hops up to a list of definitions for the term and looks at the first - wolf, the second - coyote and the third - psychotropic flower, the latter of which Judy chooses with delight. Judy returns to Nick and displays a speech bubble, saying an Otterton emoji + a Night Howler emoji = a savage Otterton emoji.

emoji into her gun emoji and fires it at Nick, hitting him. Nick falls and Judy looks horrified, but Nick winks at her and she nods. Nick jumps up, growling savagely and advances on Judy, who cries in terror.

Suddenly, Judy and Nick jump up and Judy plays Bellwether's "evil conspiracy confession" through her carrot pen and Bellwether shakes with anger. Chief Bogo appears and displays a cage emoji, which he and Judy slam onto Bellwether together. Judy then returns to Nick and displays a ZPD badge emoji and a question mark. Nick nods and pixel sunglasses

fall down onto his face as he grins and displays a badge emoji. The credits then appear in speech bubbles with Gazelle and the Tiger dancers dancing alongside them.

After the credits, Flash slowly turns to face the screen and after the "waiting" emoji, a speech bubble appears saying the words, "The End". 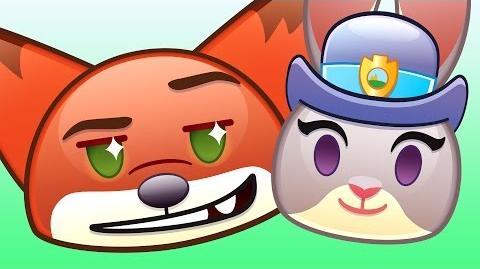 Zootopia As Told By Emoji Disney